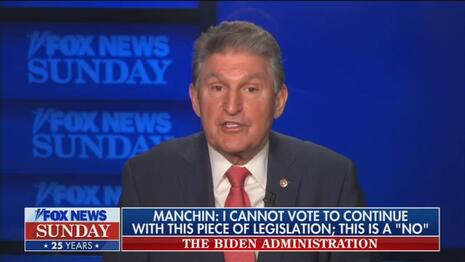 Back in October, Rolling Stone magazine declared that "Joe Manchin Just Cooked the Planet." The description of the earthly inferno that would be our inevitable fate due to Manchin was quite gruesome:

West Virginia Sen. Joe Manchin just cooked the planet. I don’t mean that in a metaphorical sense. I mean that literally. Unless Manchin changes his negotiating position dramatically in the near future, he will be remembered as the man who, when the moment of decision came, chose to condemn virtually every living creature on Earth to a hellish future of suffering, hardship, and death.

And that dire proclamation came just after Senator Manchin stated he couldn't support any version of the Build Back Better (BBB) bill that went higher than $1.5 trillion.

However, now that Manchin declared he would be a firm NO on BBB, it must be time for a Joe Manchin, destroyer of worlds, encore. This came on Wednesday when Atlantic magazine staff writer Robinson Meyer writer melted down in "We’re Heading Toward a Very American Climate Tragedy. Possessing the same level of maturity you'd expect from a snowflake after Inauguration Day 2017, Meyer began (emphasis added):

The United States is on the verge of a massive, history-rewriting failure. On Sunday, Senator Joe Manchin, the Democrats’ linchpin vote, told Fox News that he couldn’t vote for the Build Back Better Act, the vehicle for much of President Joe Biden’s legislative climate policy.

If that decision holds, then Manchin has virtually sealed the planet’s fate: The world is all but guaranteed to warm by more than 1.5 degrees Celsius above its preindustrial temperature by 2040. But it will also be a tragedy for the United States, which will all but surrender its technological advantage to China. In fact, I am concerned that by passing only the bipartisan infrastructure bill, and not a follow-up climate bill, Manchin and other Democrats are essentially subsidizing Chinese industrial supremacy.

Ironically,  if the fate of the planet is sealed, Meyer identified the real culprit just a couple of paragraphs down as -- incredibly -- not Manchin but...China!

Meyer saw the light, albeit for a brief moment (emphasis added, click "expand"):

And China, which Manchin highlights as America’s main global adversary, does not think this way. The country is no climate hero: Last year, its carbon pollution exceeded every wealthy country’s emissions combined. But its leadership has seized on new energy technology anyway, for reasons largely unrelated to climate change. Because of its dependence on Middle Eastern oil and American natural gas, the Chinese government has tried to develop as many energy resources inside its borders as it can. Its years of toxic air pollution have given it a political need, too, to develop as much low-emissions energy as possible.

If Build Back Better fails, it will be a catastrophe for the Democratic Party too. Biden has argued that only his moderation, his experience, and his institutionalism can relieve the country’s crises. Congressional Democrats followed by electing Nancy Pelosi and Chuck Schumer, geriatric pragmatists, to lead the House and the Senate, respectively. If this trio of moderates cannot deliver the goods—if they cannot, despite their decades of yammering, actually succeed in passing what is an aspirational but still insufficient climate law—then the center-left’s case for itself will collapse. The left will argue, more convincingly than ever, that only radicalism and political rupture constitute a sane response to the climate crisis.

So if China is causing carbon pollution that exceeded that of every other wealthy country combined shouldn't we put the blame on them, not Manchin? Nope.

His reasoning? Well, because as Meyer explained, China WILL PROBABLY reduce carbon emissions in the future. Really? Perhaps the solution is to wait for them to cut their pollution as Meyer has placed his sacred faith that they will do this.

In the meantime, blame Manchin even though a cutback of zero carbon emissions in the USA would have little overall impact due to China's emissions.

We now await for the third chapter in the apocalypse caused by ONE senator: Joe Manchin destroys the universe!