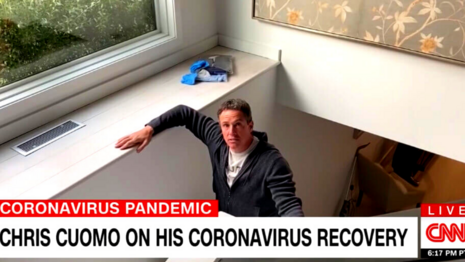 Sunday's Politico listed a number of reasons why freshly fired Chris Cuomo embarrassed his network, CNN. However there is one really big item that has been left off the list. Here is what Politico's Tara Palmeri listed and see if you can guess what she notably left off the list. I'll give you a hint, it was a blatant example of fake news for which Cuomo was widely mocked.

— He bizarrely denied allegations of sexual misconduct during a leaked phone call with MICHAEL COHEN in which he and the former Trump lawyer rehearsed how to do an interview.

— He nearly came to blows with a right-wing troll in the Hamptons after being called “Fredo.”

— He received priority Covid testing (thanks to his brother, then-Gov. ANDREW), flouted Covid restrictions after being diagnosed with the illness, and then fought with a neighbor who called  him out on it.

— He faced allegations that he sexually harassed SHELLEY ROSS, who was Cuomo’s executive producer when the pair worked at ABC News.

— He repeatedly clashed with his CNN executive producer MELANIE BUCK, who reportedly then “begged to leave” his show.

— And then finally came the news that he’d advised his brother Andrew on how to defend himself against multiple women who accused the governor of sexual misconduct — which was confirmed by an investigation by the N.Y. attorney general, and prompted CNN to suspend Cuomo and mount what would be his final investigation at the network.

Of course, the answer is Cuomo's laughable basement quarantine stunt for which he was mocked because he pretended to finally leave his basement confinement despite the fact that a week earlier he had been caught outside miles away from his home. Ironically, this was alluded to in the Politico listing in which he was called out on flouting Covid restrictions by a neighbor.

That laughable escapade was covered by Newsbusters' Nicholas Fondacaro on April 21, 2020 (Click "expand" below):

Allegedly cleared of coronavirus by the CDC, CNN PrimeTime Chris Cuomo took his “official” first steps out on Monday his basement quarantine in weeks. Or at least that was what he and CNN wanted you to believe. You see, this “official” release came over a week after Cuomo was caught outside, with his wife and kids on Easter Sunday and berated the 65-year-old cyclist who called him out. Cuomo even admitted to the altercation during his April 13 radio show which resulted in a police report filed against him.

For weeks now, Cuomo has been exploiting his diagnosis to blast President Trump’s response to the crisis. But according to an April 14 New York Post report, Cuomo had not been trying to keep people safe. On the same SiriusXM show when he complained about his job at CNN, Cuomo whined that it kept him from acting aggressively towards people who called him out on his nonsense, citing an altercation with a “jackass loser fat-tire biker” to make his point.

Following that report, the cyclist came forward with the story of how he saw Cuomo and his family flouting social distancing guidelines on Easter Sunday (April 12) when he was supposedly in quarantine. After inquiring about why Cuomo was out of quarantine when he was sick, the CNN host started to yell at the man (something a person with a lung infection shouldn’t be doing).

...Despite this news being out there, CNN continued to act as if Cuomo had never left the basement where he’s been doing his weekday shows from.

...Then, on April 20, came Cuomo’s supposed first steps out of quarantine. “All right. Here it is. The official entry. From the basement. Cleared by CDC, a little sweaty, just worked out. It happens. This is what I have been dreaming of. Literally for weeks,” he proclaimed while walking up the stairs in a home video.

He added: “This the dream. Just to be back up here doing normal things.”

Yeah, right. Cuomo has been lying to his viewers for at least a week. April 12 was the time he was caught, who knows how many times he made his way up those stairs with the cameras off. This is CNN.

So if Cuomo was flat out lying to his viewers, then CNN was aiding and abetting him in this fake news stunt which is probably why Politico skipped over it. Much too embarrassing for a fellow member of the mainstream media.