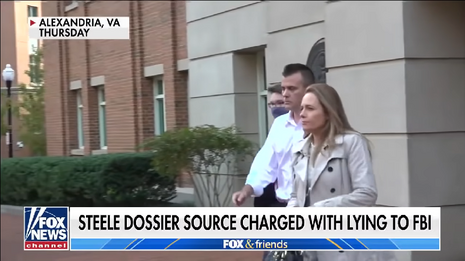 Remember when Christopher Steele's dossier supposedly incriminating President Donald Trump was treated as almost infallible holy writ by much of the mainstream media, especially CNN? Well, now that the primary source of that dossier has been indicted for lying to the FBI, where are the corrections to the record by those same media outlets? The Washington Post media critic Erik Wemple is now holding CNN to account and wonders when very specific members of that organization's staff will publicly retract their assertions about how the Steele dossier was corroborated as you can see in his Friday column, "Does CNN still stand by its reporting on the Steele dossier?"

A week ago, CNN covered the indictment of Igor Danchenko, the primary source for the discredited Trump-Russia dossier compiled in 2016 by former British intelligence officer Christopher Steele. The document, which stems from special counsel John Durham’s probe into the Russia investigation, alleged that Danchenko lied to the FBI about interactions with sources as he gathered material for Steele.

However, Wemple noticed that there was one important thing absent in the discussions about that indictment:

There was one thing missing from that discussion: CNN’s long-standing claim that the Steele dossier had been at least partly corroborated. Last year, the Erik Wemple Blog chronicled numerous such comments from CNN hosts and reporters. A typical one came from host Don Lemon in November 2017: "Listen, so we haven’t reported here on CNN the salacious details of that dossier, but much of the dossier has been corroborated.”

Lemon wasn’t freelancing; his assessment originated from a February 2017 report by Perez and chief national security correspondent Jim Sciutto, indicating that U.S. investigators had “corroborated some of the communications” in the dossier. The “intercepts do confirm that some of the conversations described in the dossier took place between the same individuals on the same days and from the same locations as detailed in the dossier, according to the officials,” noted the story. But even that report couldn’t confirm “whether any content relates to then-candidate Trump” and noted that “officials did not comment on or confirm any alleged conversations or meetings between Russian officials and US citizens, including associates of then-candidate Trump.”

Narrow though the reporting was, it served as a springboard for broader expressions of confidence in Steele’s work. “CNN, by the way, has corroborated some elements of that dossier," said anchor Wolf Blitzer in June 2017. “A lot has been been verified,” said CNN anchor John Vause in January 2018. If nothing else, the dossier demonstrates how undisciplined cable chatter can amplify a tightly worded print story.

Wemple asked CNN for comment but apparently, rather than correct the record, it seems they will continue to stand by its historical record of fake news on this topic.

In light of the recent developments, we asked CNN if it still stands by its “corroboration” reporting and, if so, to which specific parts of the dossier does that apply? We received no response. So, we’ll have to repeat the statement that the network provided for our 2020 story: “CNN stands by our reporting. Our approach to the dossier has been consistent since day one. CNN only reported details when they were corroborated, part of a government filing, or publicly discussed by officials or those mentioned.”

Consistent? Yes, to its credit, CNN covered the Danchenko indictment with a smattering of reports last Thursday. There was also a CNN.com piece. By contrast, the “corroboration” story of February 2017 received saturation coverage at a network programmed to hype all Trump-related items. That brand of asymmetry helps explain why many people mistrust CNN.

Do people mistrust CNN as much as MSNBC or is it a tossup?