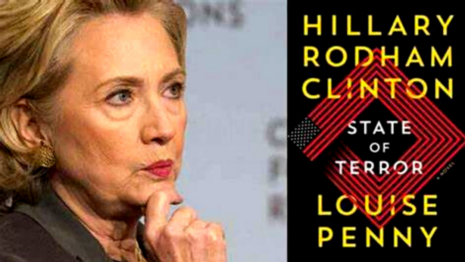 Hey Hillary! Tell us what you really think about Joe Biden. Of course, Hillary Clinton like a typical politician has not revealed that in her many interviews nor in her hardly read biographies. However, in her recent novel, "State of Terror," co-written with Louise Penny which means the latter wrote almost the entire book, we do get to find out her opinion of Biden in the guise of the very Biden-like character, President Doug Williams. Here is the description of Williams in the novel as relayed by a book review in The Guardian:

The US has recently been ruled by “delusional” Republican President Eric Dunn (his first name shared with one of Donald Trump’s sons), who was nicknamed “President Dumb” while running an administration of “near-criminal incompetence” that became “increasingly deranged”. The worst thing done by Dunn is to have “pulled out of a nuclear accord with Iran”, as Trump did. In Rodham Clinton and Penny’s efficiently suspenseful scenario, Dunn’s dumbness has increased the possibility of terrorist groups buying or stealing nuclear weapons and using them against the US.

The crazed, dangerous Dunn is followed into office by a Democrat, Doug Williams, who Ellen considers “rude” and a “fool”.

"Rude" and a "fool"  is how Hillary really views Biden/Williams . Also it is absolutely no surprise that she would think of Trump/Dunn as crazed and dangerous but shouldn't running an administration of "near-criminal incompetence" be a much better description of the Biden/Williams administration?

In contrast to these flawed presidents stands the heroine of the novel, a female Secretary of State, Ellen Adams, based on guess who.

All the antagonists are male, reasonably reflecting both America’s political history and Rodham Clinton’s own. Expectedly, but effectively, the book targets Washington misogyny: when Ellen jets in from another marathon diplomatic trip, political enemies and news pundits of both sexes sneer at her plane-hair and creased pantsuit. Secretary Adams is more human, warm and amusing than even Rodham Clinton’s admirers have often found her to be, although the side of the real politician that can seem reluctant to admit any wrong may be glimpsed in scenes justifying the use of non-official communications channels. (Revelation of HRC’s use of a private email server for state department business dogged her 2016 run.)

Exit question: Will there be a sequel to the novel in which President Doug Williams the fool resigns from office due to the utter failure of his administration followed by his female vice-president who realizes she is equally inept so she turns the Oval Office over to Secretary of State Adams?