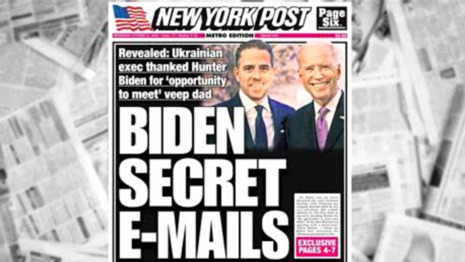 Well, congratulations Politico! It only took you nearly a year to finally recognize the validity of a major news story that most other media outlets already admitted was valid. The story in question was the October 2020 scoop by the New York Post about emails and other scandalous material found on Hunter Biden's laptop. Not only did much of the media, including notably Twitter, try to censor the story but many, such as Politico, actively tried to discredit it by claiming it was Russian "disinformation."

So what caused Politico to belatedly embark on a voyage to the obvious? Apparently they couldn't avoid continuing to deny the validity of the Hunter Biden laptop story since one of their own reporters, Ben Schreckinger, just had a book published, "The Bidens: Inside the First Family’s Fifty-Year Rise to Power" which discussed Hunter's laptop and its contents. Tuesday's Politico Playbook contains some of the highlight's of "Schreckinger's "discovery" that has already been long out there:

FIRST IN PLAYBOOK — Ben Schreckinger’s “The Bidens: Inside the First Family’s Fifty-Year Rise to Power,” out today, finds evidence that some of the purported HUNTER BIDEN laptop material is genuine, including two emails at the center of last October’s controversy.

A person who had independent access to Hunter Biden’s emails confirmed he did receive a 2015 email from a Ukrainian businessman thanking him for the chance to meet Joe Biden. The same goes for a 2017 email in which a proposed equity breakdown of a venture with Chinese energy executives includes the line, “10 held by H for the big guy?” (This person recalled seeing both emails, but was not in a position to compare the leaked emails word-for-word to the originals.)

MORE: Emails released by a Swedish government agency also match emails in the leaked cache, and two people who corresponded with Hunter Biden confirmed emails from the cache were genuine.

While the leak contains genuine files, it remains possible that fake material has been slipped in....

WHAT DOES HUNTER HAVE TO SAY? This spring, he told CBS the laptop “certainly” could be his. His lawyer, CHRIS CLARK, did not respond to questions for the book.

Contrast this ridiculously delayed Politico admission to the attack upon the credibility of the New York Post story on October 19, 2020 by Politico's Natasha Bertrand who has a sad history of hyping the discredited Trump-Russia collusion conspiracy theory. The headline was "Hunter Biden story is Russian disinfo, dozens of former intel officials say."

More than 50 former senior intelligence officials have signed on to a letter outlining their belief that the recent disclosure of emails allegedly belonging to Joe Biden’s son “has all the classic earmarks of a Russian information operation.”

...But the release of the material, which POLITICO has not independently verified, has drawn comparisons to 2016, when Russian hackers dumped troves of emails from Democrats onto the internet — producing few damaging revelations but fueling accusations of corruption by Trump. While there has been no immediate indication of Russian involvement in the release of emails the Post obtained, its general thrust mirrors a narrative that U.S. intelligence agencies have described as part of an active Russian disinformation effort aimed at denigrating Biden’s candidacy.

Thus far, Politico's Natasha Bertrand and her merry band of 50 former intelligence officials have been unavailable for comment.