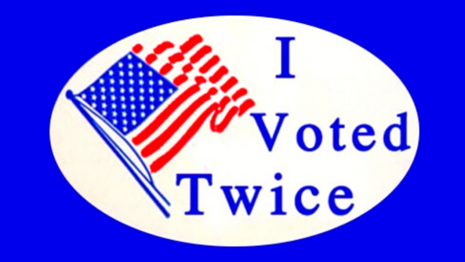 Much of the mainstream media love to highlight the difficulty people have voting in order to use that to support what they call less restrictive voting laws. One such example was in 2020 when CNN hyped the six hours a man named Hervis Rogers waited in line to vote on Super Tuesday in Texas. One problem, however. Mr. Rogers was voting illegally and was subsequently arrested for that just recently.

Here is the CNN hype on March 4, 2020, echoed by other media outlets, about the trouble Mr. Rogers claimed he had voting illegally.

A Texas man said he waited for "a lit bit over six hours" at a polling center to participate in Super Tuesday, holding that although the long line deterred other voters, he felt it was his duty to cast a ballot in the Democratic nominating process.

"I figured like it was my duty to vote. I wanted to get my vote in to voice my opinion. And I wasn't going to let nothing stop me. So I waited it out," Hervis Rogers told CNN's Ed Lavandera early Wednesday morning after casting his ballot at a polling center located at Texas Southern University, a historically black college in Houston.

Asked how long he had waited for to vote, Rogers said: "About six hours. A little bit over six hours."

Did CNN reporter Ed Lavandera ask others on the line with Rogers how long they had to wait? Apparently not because no one else is cited in his article on how long they waited. We have just the word of one person, Hervis Rogers, who we later learned was a felon with multiple convictions thus making his long line wait claim even more questionable.

The Montgomery County Police Reporter on Thursday revealed why Lavandera should have questioned others rather than rest their narrative on a single person in "MAN WHO MADE NATIONAL SPOTLIGHT ON SUPER TUESDAY BOOKED INTO MONTGOMERY COUNTY JAIL ON ILLEGAL VOTING."

On Super Tuesday Hervis Rogers told reporters that he waited six hours in line at a poll at Texas Southern University. Rogers told CNN “I figured like it was my duty to vote. I wanted to get my vote in to voice my opinion. And I wasn’t going to let nothing stop me. So I waited it out. ” Rogers was the last person to cast a ballot at his voting center in Houston. He told CNN that he wasn’t upset by the long wait but that he thought “the process could’ve been done better than that.” “But that wasn’t going to deter me from voting,” he added.

On Wednesday Rogers was arrested by the Texas Attorney Generals Office at 4101 Almeda Genoa in Houston. He is charged in the Montgomery County 221st District Court on two counts of illegal voting. In 1986 Hervis spent 4-years in prison for a robbery charge. Then in 1989, he was given 6-years for burglary of a building in Houston. Hervis was arrested in 1989 for burglary of a building. He was sentenced to 25-years in the Texas Department of Criminal Justice in September of 1995. In July of 1995, he was charged with burglary of a vehicle and sentenced to 200 days in the Harris County Jail. In 2005 he was charged with prostitution in Harris County and sentenced o 10 days in the Harris County Jail.

According to the Montgomery County District Attorneys Office, the case is being handled by the Texas Attorney General. We are awaiting information from them at this time.

Rogers is not shown to be a registered voter in Texas.

Remember, all that Super Tuesday hype promoted by CNN about the very long wait to vote at a Texas polling center was based on this one and only person who voted illegally and with a track record which lends itself to dubious veracity.

Again, could Ed Levandera not find just one other person on the line with Rogers to verify that the wait was indeed over six hours or did he stop with Rogers for fear that other responses would counter the narrative that CNN ultimately promoted about supposed voting difficulties?