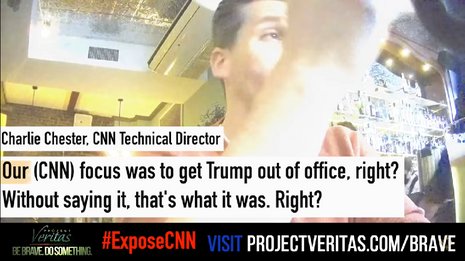 This just hasn't been a good week for CNN reporter Sara Sidner. First we had a the spectacle on Monday at the site of rioting at Brooklyn Center, Minnesota in which a bystander confronted poor Sidner about CNN "twisting up" the story and making things worse.

If Sidner thought she would get a reprieve from being questioned about the bias of CNN she was woefully wrong because just days later another bystander brought up the highly embarrassing Project Veritas video showing a CNN technical director bragging about the outright bias of his network.

Here is that bystander causing an embarrassing brain freeze on the part of Sidner by bringing up that taboo subject.

Based!! CNN is finished. 🤣 pic.twitter.com/w71QQwBu2S

The conversation begins with the bystander asking in a friendly way: "How are you doing today?"

Sidner, probably relieved that this is probably not another embarrassing situation answers: "I'm alright. How are you doing?"

"I'm doing great. I see your reporting on Twitter."

"Uh-oh!" Sidner replied with perhaps just a bit of caution.

"Yeah, it's good stuff. Hey, but I seen them Project Veritas stuff about CNN, what do you guys think about that?"

"Yeah, yeah. Okay, no comment?" This was followed by a mocking laugh by the bystander.

Exit question: If Jim Acosta is asked about the Project Veritas reports revealing CNN media bias, would he also react with a brain freeze or just outright anger at the truth being exposed?