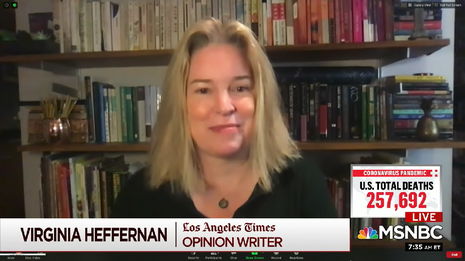 If ever there were a poster child for being a complete ingrate, it would have to be Los Angeles Times political columnist Virginia Heffernan. By her own admission she has very nice neighbors, one of whom even cleared out the snow on the driveway of her vacation home without being asked. So what kind of gratitude did Heffernan show in return? She smeared that neighbor along with the others by comparing them to Hezbollah due to their "high crime" of being Trump supporters.

Heffernan made her application into the Ingrate Hall of Infamy in her Friday column, "What can you do about the Trumpites next door?"

Oh, heck no. The Trumpites next door to our pandemic getaway, who seem as devoted to the ex-president as you can get without being Q fans, just plowed our driveway without being asked and did a great job.

How am I going to resist demands for unity in the face of this act of aggressive niceness?

Of course, on some level, I realize I owe them thanks — and, man, it really looks like the guy back-dragged the driveway like a pro — but how much thanks?

These neighbors are staunch partisans of blue lives, and there aren’t a lot of anything other than white lives in the neighborhood.

Oh! Woe is me! How can I ever show gratitude to anybody who bears the unforgiveable sin of being a Trump supporter?

Hezbollah, the Shiite Islamist political party in Lebanon, also gives things away for free. The favors Hezbollah does for people in the cities Tyre and Sidon probably don’t involve snowplows, but, like other mafias, Hezbollah tends to its own — the Shiite sick, elderly and hungry. They offer protection and hospitality and win loyalty that way. And they also demand devotion to their brutal, us-versus-them anti-Sunni cause. Some of us are family, the favors say; the rest are infidels.

Yup! Heffernan repays an act of kindness by by comparing her neighbors to terrorists.

And in her final act of supreme childish chip-on-the-shoulder self-righteous ingratitude, Heffernan proclaims that she might forgive her neighbors but only if THEY confess to being politically incorrect.

I also can’t give my neighbors absolution; it’s not mine to give. Free driveway work, as nice as it is, is just not the same currency as justice and truth. To pretend it is would be to lie, and they probably aren’t looking for absolution anyway.

But I can offer a standing invitation to make amends. Not with a snowplow but by recognizing the truth about the Trump administration and, more important, by working for justice for all those whom the administration harmed. Only when we work shoulder to shoulder to repair the damage of the last four years will we even begin to dig out of this storm.

As you can guess, Heffernan's attitude did not go over very well as you can see in these reactions:

The poison here, from @page88, suggests one should shun their kind neighbors because of their political choices.

This is the kind of psychopathic behaviour that only a lifetime of indoctrination (and/or drugs) can create. pic.twitter.com/NcrnPlBAaE

Dilemma for writer Virginia Heffernan. When it snows at her 'pandemic getaway,' helpful neighbors plow her driveway unbidden. Do a 'great job.' What a nice thing! They don't do this in the city! Only problem: Neighbors support Trump. 1/10 https://t.co/cwwBY3oK1Q

It will be interesting to hear the reactions from Heffernan's neighbors when they find out that they must be politically deprogrammed first before they are worthy of being thanked by Heffernan for clearing out the snow on her driveway.