Though they might not want you to know, there was a time when liberals considered it noble to question presidential election results. In fact, HBO made a whole movie about it, 2008's Recount.

At the time Recount was released, it received many glowing reviews. One such review was from Alessandra Stanley of the New York Times:

“Recount,” an astute and deliciously engrossing film on HBO this Sunday night, retells the tale of Florida in all its bizarre and inglorious moments, from haggling over the “hanging chad” and “butterfly ballots” to the ruckus between the Florida secretary of state, Katherine Harris, and the Palm Beach County Canvassing Board. “Recount” is not satire; it’s a mordantly serious look at a moment when character, political influence and luck fatefully collided.

...The film lays out how Mr. Gore, and the nation, missed a chance to find out for sure, partly through Mr. Gore’s own lack of nerve but mostly because the Democrats were outlitigated and outfoxed by a tougher, more sophisticated team of Republican lawyers and political consultants. 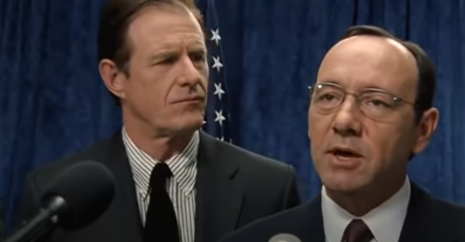 Perhaps the most ironic thing about Recount is that the main character portrayed by Kevin Spacey is Ron Klain, Joe Biden's current chief of staff. And how did Klain feel about Recount? Newsweek provided his review:

I have to say that when I first heard they were going to make the movie, I was skeptical because it seemed improbable as a film. It's fundamentally a story about people running to go to court, and where you know the ending. But it's an important story because a lot of what you see dramatized in the film are still problems in the electoral system that could happen in 2008. The basic thrust of the film is absolutely accurate and is very important in that thousands of people didn't have their votes counted in 2000.

I hope it reminds people of what can go wrong and activates them to work harder to prevent those things from going wrong, and in the two screenings I've been at, the reactions from the audience have been along the lines of "I need to go vote this year!" I think it will cause people to ask what happened about all these problems, and I think they'll be surprised to learn how little has changed, that partisan officials still run the electoral system—it brings these questions back to the forefront. It's definitely painful to watch. I've seen it three times, and the opening scene of the elderly voter trying to navigate the butterfly ballot just makes me want to scream as she punches the Pat Buchanan hole. For me, it's about fighting very hard and losing. The last eight years in some ways have made it even clearer than it was on Dec. 12, 2000, what a fork in the road it was and makes the consequence of coming up a few votes short all the more acute.

For more on Recount, see the MRC’s Brent Baker’s review. He noted that the film portrayed Florida Secretary of State as Cruella De Vil.