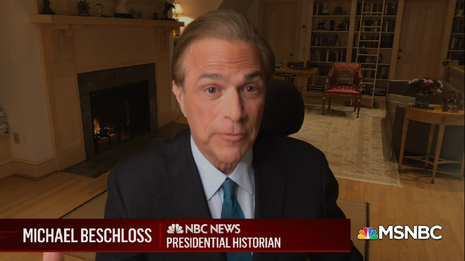 NBC's presidential historian, Michael Beschloss, found out the hard way that when you try to school President Donald Trump about Abraham Lincoln on the press, you might be the one who ends up schooled. Such was the case on Thursday when Beschloss attempted to one-up Trump on what Lincoln said.

Unfortunately for the presidential historian he was soon schooled on the subject of Lincoln and the press. First we have Beschloss inadvertently setting himself up for the ultimate smackdown on Thursday by snarking on Twitter about Trump and Lincoln.

Abraham Lincoln never told an esteemed reporter, "Don't talk to me that way! . . .I’m the President of the United States. Don't ever talk to the President that way!"

This also caused Beschloss' knowledge of presidential history to be questioned:

The elites are very stupid people who are being held up by people who love their institutions https://t.co/HXlLw7IJX8

Finally we have this suggestion as to what poor Beschloss should do with his self-description:

Take “presidential historian” out of your bio. pic.twitter.com/q13BX1R02N