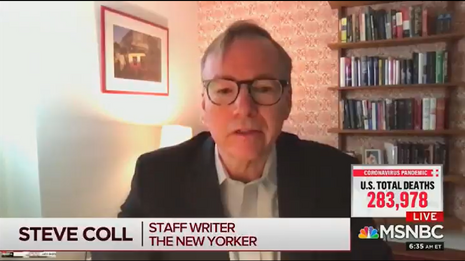 Imagine being a supposed journalist that views free speech as a threat to the mainstream media groupthink. You don't have to imagine hard because we now have the example of Steve Coll of the New Yorker magazine who unashamedly proclaims that free speech is a threat to what he perceives as journalism, namely the liberal narrative that he wants to see maintaining a monopoly on public information.

Coll isn't just a magazine writer -- he's the dean of the Columbia School of Journalism, and a former managing editor of The Washington Post. And yet, he still presented free speech as a "weaponized" threat to the liberal media elite on Monday's Morning Joe show during an interview with Kasie Hunt.

The New Yorker's @SteveCollNY suggests Mark Zuckerberg's "profound" support of free speech is problematic: "Those of us in journalism have to come to terms with the fact that free speech, a principle that we hold sacred, is being weaponized against the principles of journalism." pic.twitter.com/JK3c5tnLou

KASIE HUNT: You write about, we had three big networks, we had a handful of prominent news weeklies, papers, that covered the country and a lot of local journalism. So the media quote/unquote as people like to think of it was in fact a relatively focused narrow group that if they made decisions together could actually impact things. Now with this fragmented landscape of these major companies, their decision making is obviously part of this and we know they can’t shut everything down by themselves because other websites pop up. There’s some truth to the fact that they are mass platforms. Everyone is on Facebook or many adults are on Facebook so they have a bigger responsibility than some of the other, you know, Reddit, 4chan, 8chan. What's the answer? What do the companies need to do in your view to actually help solve some of this?

It's interesting that Kasie Hunt sees the increased sources of information as something that needs to be "solved." Of course, Coll is of the same mindset as you can see in this answer.

STEVE COLL: Yeah. No, it’s another great question. Just to, you know, pick up your point the homogeneity of the media in the ‘60s and ‘70s obviously wasn’t all a good thing, and it was ripe for disruption, and it has been disrupted and Facebook is one of the big disrupters. I read a pretty good book this year called Facebook, The Inside Story, which was a very well-reported inside account of Facebook, searching for the answer to the question you asked, and I came away the conclusion that the problems that we face — I mean, this is a private corporation that is motivated, as all companies are, to make money. That is acting as a kind of public square and to expect that it is going to adjust its motivations to preserve democracy or to do the right thing all of the time, it’s just naive. It’s not what it was built to do.

This is weird, since that's also true of The New Yorker, and The Washington Post, and so on.

COLL: And the history of Facebook that's described in this narrative is one of continually breaking things and then trying to fix them partially and getting better and better at apologizing. But I came away from it thinking, you know, it’s a structure. It is not something that can be changed except by changing the structure of it. Yes, Facebook has moved somewhat. They had a better election in 2020 than they did in 2016. They've learned to put some brakes on it here and there, but you can’t get away from the fact that their mission is to connect everybody in the world.

Good news for Steve. Facebook did act to "put some brakes" on the free flow of information by suppressing information during the election about the Hunter Biden laptop scandal. Now back to Coll continuing his conniption fit over free speech.

COLL:That’s what motivates Mark Zuckerberg and it has — it’s his passion and he profoundly believes in free speech. Those of us in journalism have to come to terms with the fact that free speech, a principle that we hold sacred is being weaponized against the principles of journalism and what do we do about that? As reporters we kind of march into this war with our facts nobly shouldered as if they were going to win the day and what we’re seeing is because of the scale of this alternate reality that you have been talking about, our facts, our principles, our scientific method, it isn't enough? So what do we do?

It sounds like what Coll wants to do is to suppress the free speech he claims is being "weaponized" against the liberal media narrative. What's suggested here is that any Hunter Biden news that disturbs liberals is against "facts nobly shouldered" or "the principles of journalism" or the "scientific method." Their arrogance knows no bounds.