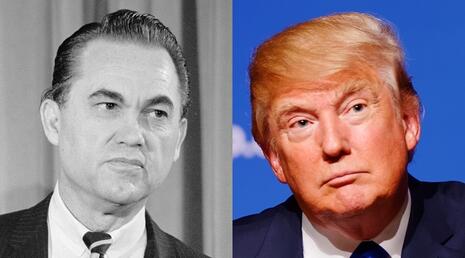 Usually when the mainstream media tries to smear President Donald Trump by comparing him to George Wallace it is just done in passing such as when John King mentioned this or when Joy Reid threw it out there. However, Steve Coll writing in the New Yorker on Friday dedicated a full article to this dubious comparison in "Donald Trump, George Wallace, and the Influence of Losers."

One thing all these comparisons have in common is not once do they mention that Wallace was a Democrat.

Trump’s charisma, such as it is, synthesizes the rudeness and the faux “authenticity” of recent reality television with the racialized and nativist rhetoric that dates from way back in our history. He has drawn inspiration from such disparate populist figures as Joseph McCarthy, Arnold Schwarzenegger, and Jesse (the Body) Ventura, the professional wrestler who, in 1999, was elected governor of Minnesota. Trump’s most important predecessor, however, was probably George Wallace, the segregationist governor of Alabama, who ran four times for the White House and became “the first serious presidential candidate in the twentieth century who identified himself as a working man,” as the historian Michael Kazin writes in “The Populist Persuasion,” an essential history of American populist rhetoric and personalities on both the right and the left.

...Wallace was who he seemed to be—a self-made, ambitious bitter-ender with a knack for the campaign trail and a capacity for personal reflection, at least toward the end. Trump, a Wharton graduate who also rails against the Ivy League, has transcended Wallace’s political achievements by delivering transparently cynical performances that nevertheless, with his gift for stagecraft, come across to many as authentic. In Wallace’s time, it was common to dismiss his candidacy for the Presidency as a last gasp from the dying Jim Crow South. We can now see it as a warning flare—and as a reminder that it was not only Donald Trump who conceived of Trumpism.

Of course, Steve Coll will make no comparisons between Wallace and his fellow Democrat, Joe Biden, despite the fact that Biden is on record as praising Wallace early in his political career when he was still in the process of running for the U.S. Senate as you can see in this clipping from the March 27, 1972 Wilmington Morning News.

Here is what Biden said about Wallace that you won't be seeing Steve Coll writing articles about:

He has hit on the populist theme. He is going around saying things part of which people know are true but the other politicians aren't talking about.

And although Coll stretches to compare Trump to Wallace, in the next sentence Biden compared himself favorably to Wallace. We now await the Steve Coll article comparing Biden and Wallace that will probably never be written.