Atlantic Magazine: Warren Campaign Failed Because She Was TOO Competent 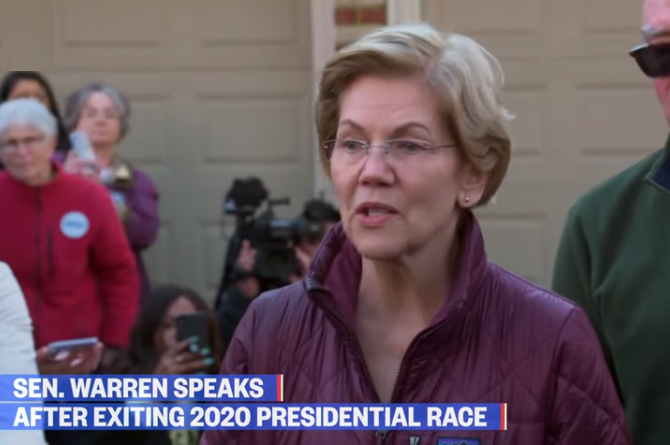 Elizabeth Warren has left the race, and it's all our fault. Sniff! She was just too competent for us.

Such was The Atlantic magazine epitaph for the Warren campaign on Thursday. Megan Garber bemoaned the (Democrat) failure o appreciate the brilliance of the 1/1024th Native American candidate. It was titled "America Punished Elizabeth Warren for Her Competence." Its subtitle added "The country still doesn’t know what to make of a woman—in politics, and beyond—who refuses to qualify her success."

Republicans had nothing to do with Warren's failure to thrive as a Democrat contender. This isn't quite as truth-deprived as Jessica Valenti claiming on the website Medium that "the media and voters basically outright erased and ignored her."

Garber began by recalling a report from FiveThirtyEight's Clare Malone at a Pete Buttigieg even in New Hampshire, where a woman said  “When I hear her talk, I want to slap her, even when I agree with her.”

A version of that sentiment—Warren inspiring irrational animus among those whom she has sought as constituents—was a common refrain about the candidate, who announced today that she was suspending her campaign after a poor showing on Super Tuesday. This complaint tends to take on not the substance of Warren’s stated positions, but instead the style with which she delivers them. And it has been expressed by pundits as well as voters.

Garber mentioned Politico, and Bret Stephens, and Donny Deustch, and the Boston Herald.

So this somehow explains why Warren placed third in the primary in her own state of Massachusetts? And now we get into how Warren's supposed competency brought her downfall.

The campaigns of those who deviate from the traditional model of the American president—the campaign of anyone who is not white and Christian and male—will always carry more than their share of weight. But Warren had something about her, apparently: something that galled the pundits and the public in a way that led to assessments of her not just as “strident” and “shrill,” but also as “condescending.” The matter is not merely that the candidate is unlikable, these deployments of condescending imply. The matter is instead that her unlikability has a specific source, beyond bias and internalized misogyny.

Warren knows a lot, and has accomplished a lot, and is extremely competent, condescending acknowledges, before twisting the knife: It is precisely because of those achievements that she represents a threat. Condescending attempts to rationalize an irrational prejudice. It suggests the lurchings of a zero-sum world—a physics in which the achievements of one person are insulting to everyone else. When I hear her talk, I want to slap her, even when I agree with her.

Did competency cause Warren to make the phony claim of being an Indian or to knife Bernie Sanders for transparently political purposes by accusing him of making sexist remarks to her? There was no mention of this. Instead, Garber went down a rabbit hole about how culture needs their competent women to have "hot mess" personal lives, like the Liz Lemon character on the sitcom 30 Rock.

What Warren’s words are, though, is unapologetic. Warren, is, very notably, not a hot mess. She has presented herself as omnicompetent, in control, not even “a little bit of a fuck-up”—and, therefore, as an antidote to the political and moral chaos that has been sowed by the presidency of Donald Trump. She is competence incarnate. She has a plan for that, just in general. She is unapologetically—and unavoidably—credentialed. She is a professor at Harvard. She created the Consumer Financial Protection Bureau. She embraces those facts as assets. Which is also to say that, on the campaign trail, she has done what campaigning requires candidates to do: She has sung her own praises. She has sold her own story.

Anyway, could all this hand-wringing about competence and being condescending have more to do with the fact that Warren is a liberal rather than a woman? I present to Garber an example of somebody who was very condescending to a woman in the pages of The Atlantic on March 22, 2016:

Now we have Palin, moving not just from politics to talking-about-politics, but from politics to something-that-has-nothing-at-all-to-do-with-politics. Here she is, channeling Reagan and Schwarzenegger and Fred Thompson and Sonny Bono, in a door that filters people not just between campaigns and TV news, but between campaigns and pure entertainment. Palin Judge Judy-ing herself is, of course, only the latest example of candidates, and former candidates, feeding—and feeding from—the reality TV-industrial complex. Tom DeLay on Dancing With the Stars. Donald Trump on The Apprentice and The Celebrity Apprentice.

Yup! That condescending person was YOU discussing Sarah Palin, Megan Garber. So, bottom line, all this hoopla about competence and condescension really depends on the politics of the woman in question.