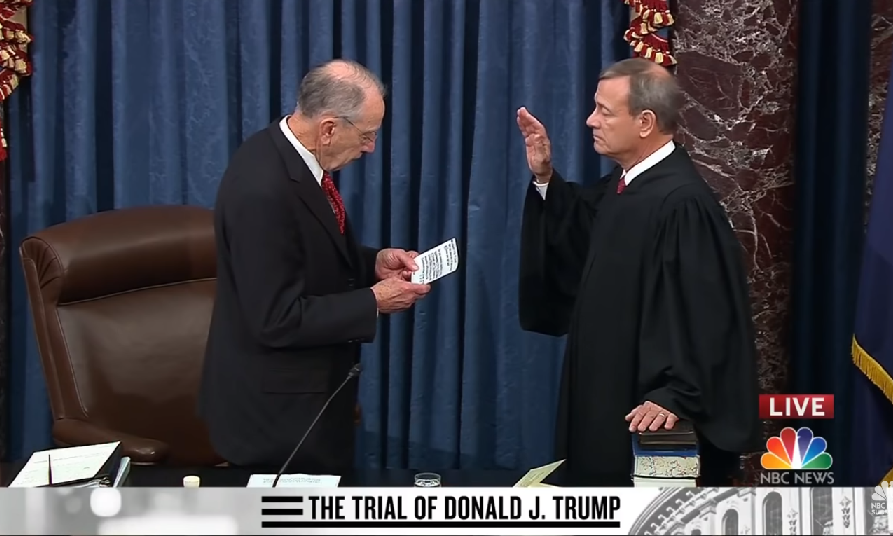 The latest attack upon the Republican Senators who will sit as part of the jury in the impeachment trial of President Trump is truly bizarre. However, perhaps not so surprising considering the source: Amanda Marcotte of Salon.

Her latest wacky shtick is that those Republicans will probably act as a throwback to Jim Crow due to jury nullification. In Marcotte's wild premise, jury nullification is when you don't vote to convict based on the dubious charges of abuse of power and obstruction of Congress that the House rushed through to get passed before Christmas. Neither charge constitutes high crimes and misdemeanors  but Marcotte made her absurd claim on Friday in "Why the Senate's impeachment trial has way too much in common with the Jim Crow past."

What the Senate is about to do is akin to the practice of jury nullification. That's where a jury decides that either they don't think the crime should be a crime at all, or that they believe people like the defendant should above the law, and so refuse to convict no matter how guilty the defendant is. This something that in theory, and sometimes in practice, can be used for good as when a jury refuses to throw someone in prison for a low-level drug offense, or refuses to enforce a law restricting free speech. But historically in the U.S., jury nullification has tended to be used to uphold injustice and reinforce racist or sexist systems of power.

In other words, exactly what Senate Republicans are planning to do. That becomes more obvious every day as more evidence of Trump's guilt comes out, from the revelations by Rudy Giuliani's former associate Lev Parnas to the Government Accountability Office declaring that Trump broke the law by withholding military aid to Ukraine.

Ah, how dare those nasty Republican senators cast aspersions upon the credibility of Lev Parnas who popped up as conveniently at the tail end of things as Julie Swetnick at the conclusion of the Kavanaugh hearings.

The most disturbing and frequent historical examples of jury nullification come from the Jim Crow South, where it was normal for all-white juries to acquit Klansmen and others who committed racist murders — not because they genuinely believed they were innocent, but because they believed it should be legal for white people to murder black people in cold blood.

From jury nullifiers, Marchotte then goes to a portrayal of the Republican senators as supporters of cold blooded killers in the Jim Crow South where, as historical fact, the Jim Crow laws were of entirely Democrat origin.

...the social circumstances of Trump's upcoming acquittal go straight back to those same forces of white supremacy that have led to so many other travesties of justice in the past. After all, the main reason Senate Republicans are averse to taking what seems to be an easy way out — convicting the obviously guilty Trump and letting his Republican Vice President, Mike Pence, take over — is because they fear crossing the notoriously loyal Trump base, who represent their only possible chance of holding onto the Senate or retaking the House this November.

And the reason that base is so loyal, as with many things in this country, relates to racism. Trump's base is motivated by what sociologists delicately call "racial resentment," which is a nice way of saying that these white people see changing demographics in the U.S. and growing challenges to white domination, and they're angry about it. Furthermore, they see President Trump, a blatant and shameless racist, as their best weapon to fight to preserve a system of white supremacy.

Once Marcotte pulled out her racist smear, she just couldn't help but to go ridiculously overboard on it. As we have seen before, she just can't help herself so don't be at all surprised to see put that smear to use again and again and again the closer we get to Election Day.