The Russian comedians have struck again and the Washington Post is not amused. as you can see in the title of their story last Saturday by Kim Bellware, "Rep. Maxine Waters thought she was talking to Greta Thunberg. It was actually Russian trolls." The article strongly suggested that the comedians are actually disinformation agents of the Russian government.

The comedians also released an animated video cartoon of the call as you can see below.

The call starts innocently enough: Rep. Maxine Waters (D-Calif.) warmly greets the voices on the line, whom a staffer identifies as Greta Thunberg and her father, Svante. They share a laugh about Waters’s nickname, “Auntie Maxine.” The congresswoman praises her young caller for her climate change activism.

“You have made quite a big, big, big, big thunder on this issue. I am really, really very proud of you and the work that you’re doing,” Waters is heard saying.

The congresswoman and her staff thought they had connected with Thunberg, the 17-year-old Swedish climate activist who was recently named Time magazine’s “Person of the Year.” In reality, two 30-something Russians, Vladimir “Vovan” Kuznetsov and Alexei “Lexus” Stolyarov, were on the other end of the line. The duo describe themselves as comedians and pranksters, but they are widely suspected of having ties to the Russian government.

In case you didn't get the Washington Post message that the comedians could be a latter-day Boris and Natasha, it was emphasized again.

But security experts warn that what’s being passed off as prank-call mischief is really Russian misinformation meant to undermine the United States.

Got that? Anonymous "security experts" equate embarrassing gullible liberals like Maxine Waters or Adam Schiff with undermining America. Then it was repeated yet again.

Whether the pair are agents of the Russian government, the kind of ruse they pulled on Waters can accomplish two goals for Russia, according to Kathleen Hall Jamieson, a communications professor at the University of Pennsylvania and the author of the 2018 book, Cyberwar: How Russian Hackers and Trolls Helped Elect a President.

“The first [goal] is adding info to a political dialogue in which discrediting one side is useful to Russia,” Jamieson told The Post by phone. “The second is being able to make the argument to the rest of the world that U.S. leaders are easily duped. Putin’s interests are served when U.S. leaders are made to look foolish in the eyes of the world.”

So....The Post never seeks to make Republican leaders look foolish in the eyes of the world? Because that would serve Putin?

Bellware finally gets to the details of the easy duping of Waters that made the call so funny, a fictional exchange between Thunberg and Trump: 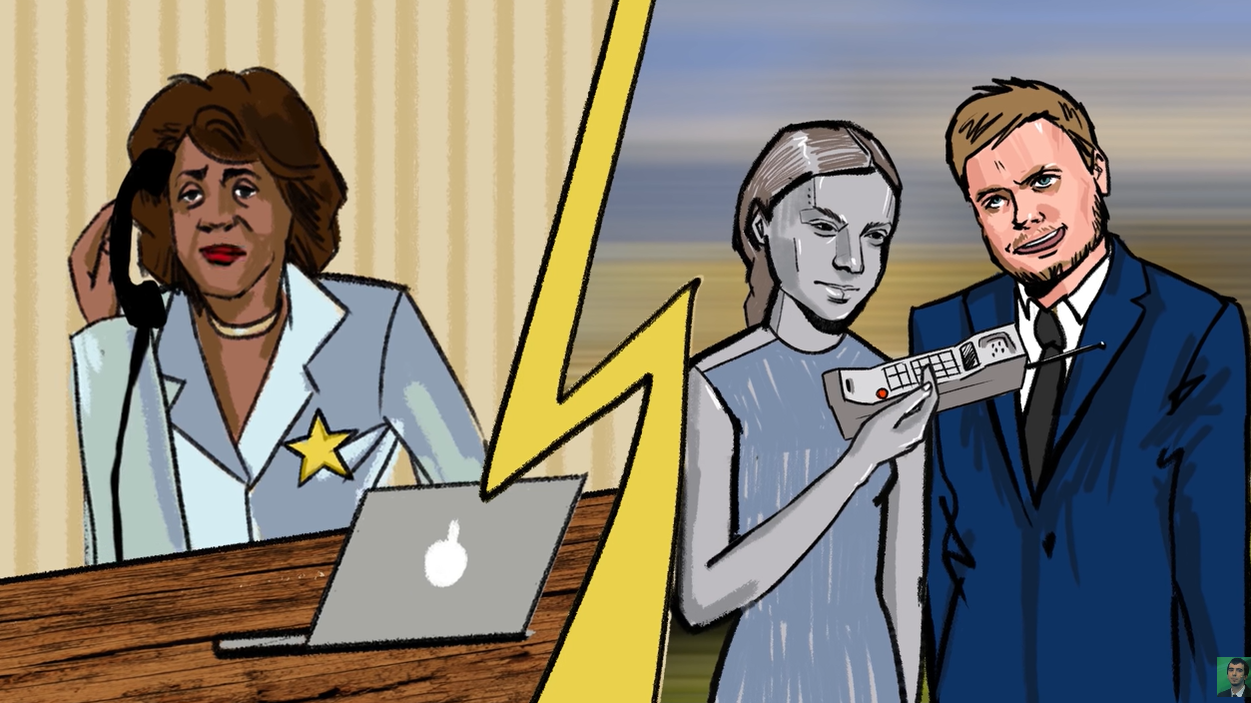 [T]hey tell Waters that the president made Thunberg cry when he said, “You’ll never achieve your goals like those congressional fools who accuse me,” and “I’ll tell you the truth: I really wanted to push the Ukraine president to put my competitor on trial. And he will go to trial with you, with [a bunch of] Democrats. … I would have a separate cage for all of you.”

“Oh my God, he mentioned the Ukrainian president?” Waters is heard asking.

The caller impersonating Thunberg’s father offers that they have an audio recording of Trump’s remarks to Greta that they can provide to the congresswoman.

Waters is heard assuring the callers that her colleagues are working diligently to gather facts in the impeachment case against Trump. “[I]f the public knew he talked to Greta like that, and that she will never achieve — that will go against him, too,” she said.

Waters ends the call by offering to arrange a meeting as quickly as possible, to which the callers agree.

And if you burst out laughing at that exchange, according to the Washington Post you are probably a victim of an official Russian government disinformation comedy campaign.