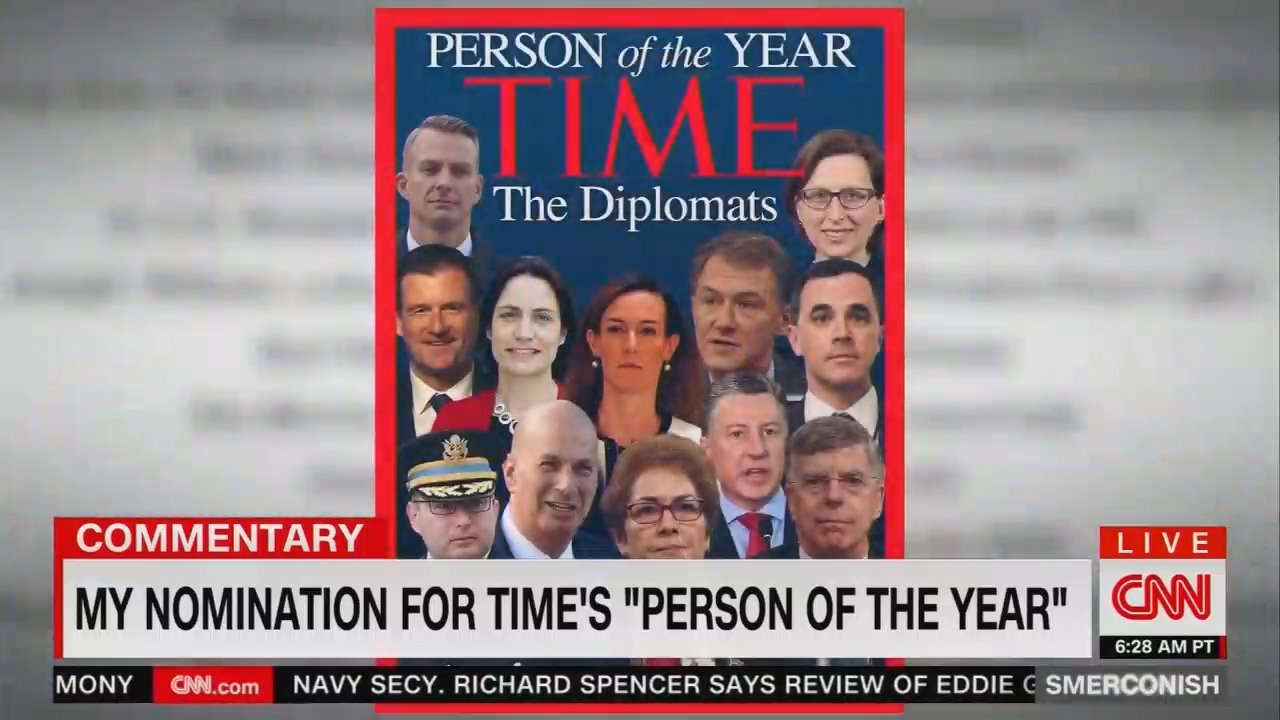 On CNN Saturday, host Michael Smerconish recommended that a bunch of gossipers be named as Time magazine's "Person of the Year." The gossipers he had in mind were the diplomats who appeared at the House Impeachment Inquiry and testified based on second and third hand hearsay. Hearsay, of course, is what gossip is, namely relaying information that they heard from somebody else and, often, the person they heard it from also heard it from someone else as well.

So for the momentous act of removing a legally elected president of the United States from office based on hearsay, or gossip, Smerconish actually wants to honor such an act with being named Time Person of the Year. Historically, it's not meant as an honor, but as a marker of the most historic, newsworthy person or people. They gave it to Ayatollah Khomeini, and to Hitler.

These hearsay diplomats did not "captivate" the nation, they were barely noticed.

Watch as Smerconish absurdly makes the case to honor the diplomatic gossipers:

On December 11, Time magazine's editors will announce its Person of the Year. Right now, the magazine has an online reader poll with a wide range of suggestions. I have my own choice, which I'll reveal in just a moment. This tradition launched in 1927 as Man of the Year with aviator Charles Lindbergh. The news weekly putting on its cover a person, group, idea or object that, quote, for better or for worse, has done the most to influence the events of the year.

And now comes the Smerconish pitch to honor gossiping as a means to undo the last election:

My choice is a group too but it's not one listed on their site. I vote for the diplomats. William Taylor, George Kent, Marie Yovanovitch, Alexander Vindman, Jennifer Williams, Kurt Volker, Tim Morrison, Gordon Sondland, Laura Cooper, David Hale, Fiona Hill and David Holmes. For these past two weeks of impeachment hearings the nation was captivated by these civil servants who usually go about their jobs in anonymity. So that's who gets my vote. The diplomats. they thought it was their patriotic duty, their moral duty to come forward, some of them after being specifically directed not to, and reveal what they heard, what they saw, what they knew about the controversial policy actions regarding aid to Ukraine. They had to put up with attacks from people with much more name recognition, including the president himself. They have earned my vote as "Time's" person of the year for 2019.

Watch this questioning of the Democrats' star witness Ambassador William Taylor, among those whom Smerconish wants to name as Time Person of the Year, to get an idea of how ridiculous impeachment based on hearsay can be.