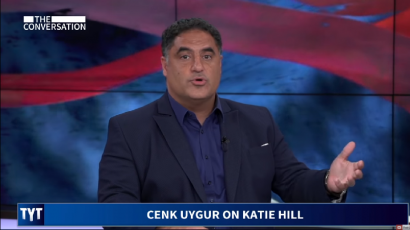 Cenk Uygur, former MSNBC host and co-founder of the leftist YouTube channel The Young Turks, has announced his candidacy for the seat that Katie Hill resigned from in disgrace, the 25th Congressional District in California. One of his campaign promises that I'm sure he will be able to fulfill is to fight Republicans like "someone who's going to rip their face off."

Uygur's pledge to get down in the dirt can be ascertained from the headline of Tuesday's Hollywood Reporter article about his upcoming campaign, "Cenk  Uygur Unloads on Rivals in Race to Replace Katie Hill in Congress: 'I'm Going to Maul Them.'"

Cenk Uygur is itching for a fight. "I say to the Democratic voters of the 25th district: Let me at ’em. Do you want someone who’s going to be polite to the Republicans or do you want someone who’s going to rip their face off?" Uygur told THR on Nov. 16, three days after announcing he’s joining the race to fill the House seat vacated by Katie Hill amid sexual-misconduct allegations.

Uygur’s candidacy — he’s the co-founder of the liberal news site The Young Turks (TYT) and a former MSNBC host — all but guarantees that the race in the swing 25th District, which includes the Hollywood-adjacent Santa Clarita and Simi Valley, will be a media circus. Former Trump campaign adviser George Papadopoulos, who served time in prison for lying to the FBI about his Russia contacts, has filed paperwork, and right-wing provocateur Mike Cernovich tweeted that he’s considering a run in the district, which suffered a school shooting on Nov. 14 that left three students dead. A special election has been called for March 3.

Notice how the reporter, Peter Kiefer, describes Cernovich as a "right-wing provocateur" while Uygur somehow escapes being characterized as "left-wing.?"

On the Democratic side, Uygur (whose name is pronounced "Jenk You-gur") will be competing against California Assemblywoman Christy Smith, who has already nailed down 40+ endorsements from officials across the state — and Alyssa Milano. Uygur intends to challenge Smith from the left. But his campaign is facing backlash. Critics have been recirculating demeaning comments he made about women in the early 2000s. Those comments, for which he later apologized, got him ousted from the Justice Democrats political action committee (which he co-founded) in 2017.

What’s likely more problematic is that Uygur lives in West L.A. and has never resided in the district. Smith already has seized on the topic. "How about all of you man-spread in your own damn districts," she tweeted.

And since Katie Hill had to resign from her seat due to sexual allegations, it is ironic that Uygur is trying to replace her despite his own problems. It will be interesting to see if Cenk "rip their face off" Uygur complains about dirty politics if any of his opponents brings up his comments about women.