Teen Vogue Surveys Politics of 20 Youths; Not One Conservative 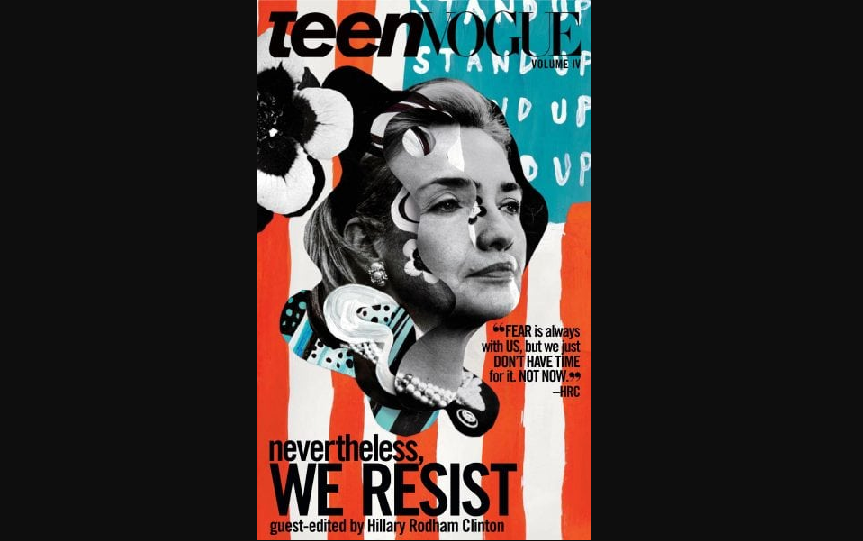 You pretty much know that the leftist hive of Teen Vogue would exclude conservatives in its survey of youth politics when the synopsis of each young person from 16 to 24 featured is prefaced by the sentient being's preferred pronouns.

Preferred pronouns, of course, are one of the easy symbols to recognize that any such article would act as if conservative or Republican youth would be considered to be creatures from another world thus not even within the Teen Vogue realm of being considered for attention.

The best Teen Vogue could do is the occasional “unaffiliated.” But no conservatives.

In this Teen Vogue hive, political diversity means a range of views from liberal Democrat (since conservative Democrats no longer exist this is the only type of Democrat left) to Communist with a sprinkling of Socialists and Anarchists in between.

So let us now join theTeen Vogue political survey (excluding conservatives of course) as "20 Young People Explain How They Identify Politically and Why" while being always very careful to observe their all-important preferred pronouns:

My entire life, I knew that I was a Democrat. My parents have always been far left and democratic. They instilled their beliefs on my siblings and me. The Democratic Party’s ideals match up with mine, so I’ve always been a Democrat. The 2016 election was an event that really secured my beliefs. My bubble was popping, and it was hard to come to terms with that. Most Democrats could understand my beliefs.

Although I wish the party would shift more left, I stick with it.

Good news, Ellie, the Democrat Party is now in the process of shifting from Menshevik to Bolshevik. So stick with it.

I've found that my parents are great resources that direct me in the right direction for information. While our stances align with each other, I have worked to never just blindly agree with everything they think.

My political leanings were definitely influenced by my upbringing in a city. My elementary school was racially and socioeconomically diverse. It wasn't until college that I really realized a diverse life wasn't the norm. I’ve found that in the liberal echo chamber of a city, everyone sort of agrees. There's not much debate or argument because we're all on the same page.

Warning! Warning! Batia appears to be experiencing a dangerous moment of mental clarity. Please send in the Re-education Team.

... I met many communists and anarchists in Paris. When I got home, I was determined to study as hard as I could. I read through [Karl Marx's] Capital, Volume 1, most of [Vladimir] Lenin's works, some [Peter] Kropotkin, [Rosa] Luxemburg, some [Leon] Trotsky, some works by historians, and many articles and online texts. I joined discussion groups and met a lot of other leftists.

I consider myself a Marxist but am still sympathetic to anarchism in the sense that I do think there is a meaningful distinction between libertarian and authoritarian conceptions of communism, and that the need to abolish the state must be emphasized. I'm still learning a lot, and I want to work with others to understand how to liberate humanity and abolish class society and wage labor.

Then there is Sorin's debate between anarchy and democratic socialism:

When my parents divorced two years ago, I was no longer constantly expected to uphold the same ideology as my father. I could express nonlibertarian opinions in my own home without being accused of being a socialist/communist sympathizer or an enemy of the poor. It was also the first time that I could openly question my gender, and I realized that I was (and still am) trans. I could say, as I always wanted to, that I wanted there to be laws in place protecting the LGBTQ+ community — my community — from workplace discrimination.

Then I got into the punk scene. That was like putting gasoline on a campfire. I had only known anarchism as the more extreme sect of libertarianism, anarcho-capitalism. I now understood anarchism to be much more vast than that. Anarchism inspired my belief that a just world could be created through communities that were wholeheartedly interested in and able to support their fellow people once they are no longer held down. In order to shift power from those that hold it, we need to destroy the pieces of the system that hold capital where it is. But if a politician were to introduce good policies, I would be in support of that.

Anarchism or democratic socialism? Ah, such tough choices we have in life.

I consider myself to be a leftist because the modern idea of liberalism is not enough and is often too complacent to counter the Trump administration and effect radical change. I am an anti-racist, anti-capitalist, anti-imperialist, and a prison abolitionist; I am also concerned with environmentalism and intersectional feminism.

Shame on you, Emily! You did not declare yourself to be a border abolitionist you lousy xenophobe.

Well, as we see, the range of Teen Vogue goes from left to even farther left within their political cocoon although Batia Krinsky was dangerously noticing that liberal echo chamber where there was not much debate or argument because they're all on the same page... of Teen Vogue Magazine.

On October 22, Glamour magazine editors named their women of the year. There were no conservatives chosen, but plenty of liberals (including environmental extremist Greta Thunberg and author Margaret Atwood).

On October 9, People magazine chose the “women changing the world.” Again, no conservatives.