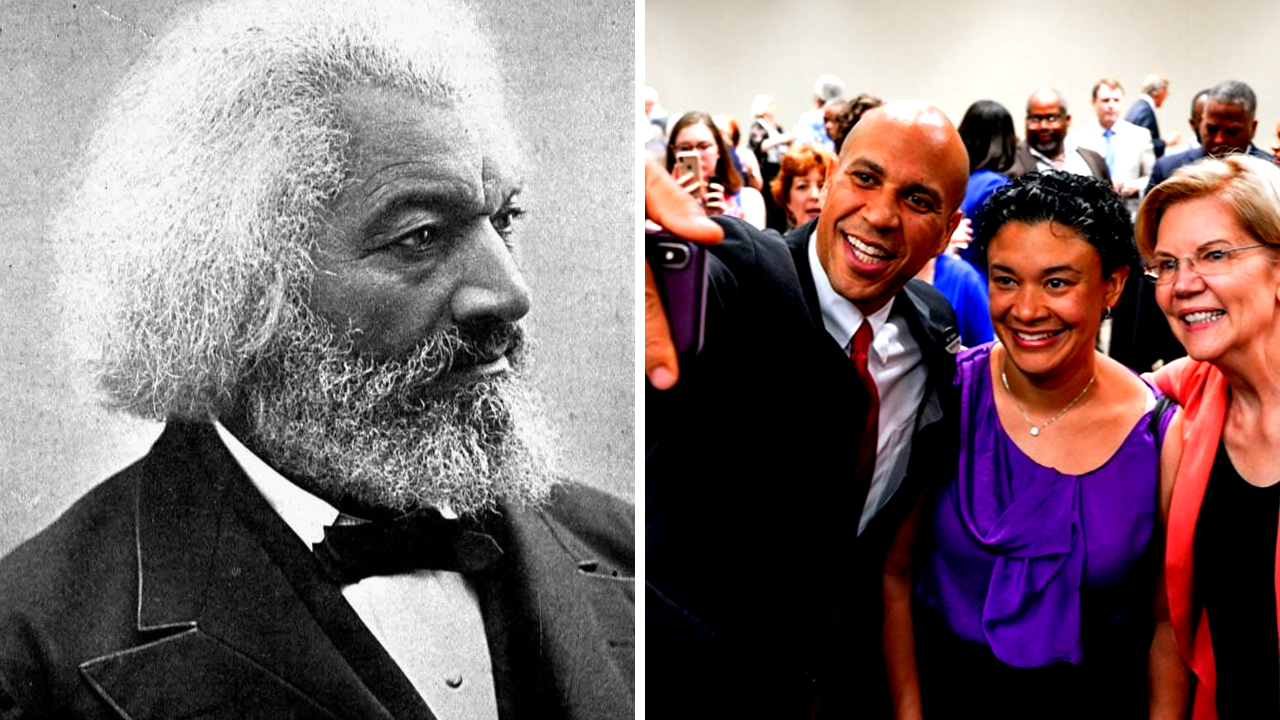 If the mainstream media wants to find out why fewer and fewer people take them seriously, a September 18 article in the Washington Post would be towards the top of the piles of evidence. The very title of the story by Hannah Natanson reflects both the extreme shallowness along with the obvious bias to produce the incredibly cringeworthy "Frederick Douglass photos smashed stereotypes. Could Elizabeth Warren selfies do the same?"

Groan! And if you think the body of the article will somehow will redeem itself you would be wrong. It is also chock full of embarrassing cheerleading for Warren while attempting to stretch to make an absurd connection between Warren selfies and Douglass photos.

Read as Natanson makes herself a well-deserved target for mockery with her laughable analogy.

They look nothing alike.

Frederick Douglass — a black man campaigning for the abolition of slavery in the 1840s — appears alone in almost every photograph, staring down the camera in isolated, thoughtful splendor. Elizabeth Warren — a white woman campaigning for the presidency in 2019 — features today in countless iPhone photos and Instagram feeds, her arm around voter after voter, always bearing the same wide grin.

The two are separated by race, gender and more than 100 years of history that forged an America that would probably be unrecognizable to Douglass. Still, experts say, their use of photography collapses the distance: Douglass sat for scores of pictures to normalize the idea of black excellence and equality, and Warren’s thousands of selfies with supporters could do the same for a female president.

Gee! I wonder who Natanson is supporting for president in 2020? Her absolutely neutral reporting reveals not a hint of bias.

Although in a vastly different context, Warren is today confronting another harmful myth, experts said: that a woman is not presidential and does not belong in the Oval Office. Over the course of her campaign, she’s developed a similar strategy to fight back. At the end of every rally, Warren — one of three front-runners in the Democratic race, according to a Washington Post-ABC News poll — stays behind to pose for pictures with pretty much every supporter who asks.

Who knew selfies were such a powerful instrument in the liberation of a faux Native American female throwing off the shackles of an oppression as great as slavery from deep within the professorial lounges of Harvard?

She went on to quote professors who were clearly fans of Warren, agreeing with the Post's absurd comparison:

“She’s presenting a public image of herself as somebody who is presidential,” said Alexander Alberro, a Columbia professor who studies the history of photography. “What Douglass tried to do was to create a public persona in the face of the negative type of image of African Americans at the time … so I think the comparison is really good.”

“And these days, Elizabeth Warren is making use of the selfie to assert the same thing: That she’s one of us, she is in the same boat as everyone else, she has to stand before the camera just like us."

“She’s showing she’s warm and thoughtful and interested in people through these really direct personal interactions and pictures,” she said. “It overcomes that image that women in leadership roles are cold, they’re unfeeling, they’re not kind.”

Elizabeth Warren is the kindest, bravest, warmest, most wonderful human being I've ever known in my life. Raymond Shaw told me that.