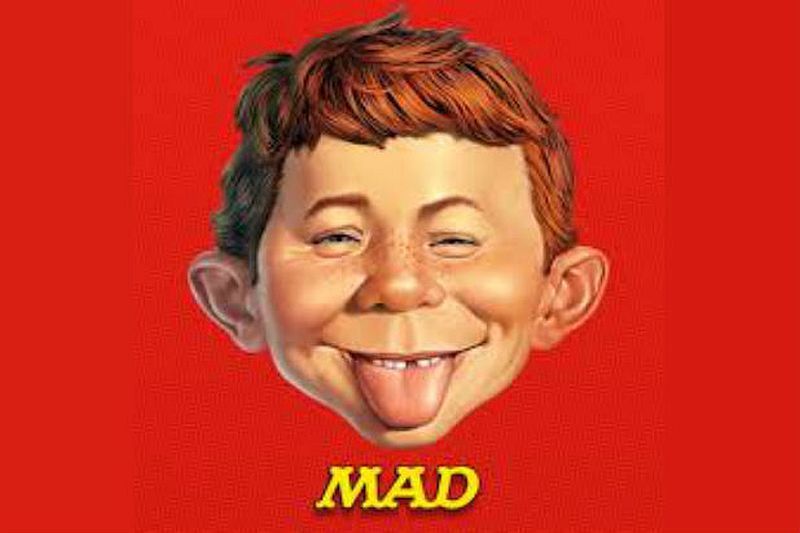 Or perhaps: What, Me Worry About "World's Oldest Seventh-Grader?"

Why can't someone mourn the imminent demise of Mad magazine without a bad case of Trump Derangement Syndrome? Such was the case with Washington Post columnist David Von Drehle on Friday. Instead of concentrating on Alfred E. Newman, poor Von Drehle just couldn't get his mind off of You-Know-Who.

At least he made a good start writing about the topic before his TDS took him on a bizarre tangent in "Mad magazine’s demise is part of the ending of a world."

My own middle-school years in the early 1970s coincided with the peak of Mad’s influence and circulation. Two million people bought the magazine in those days, and even on a 50-cent weekly allowance, it was worth 40 cents. The “usual gang of idiots” (as Mad referred to its stable of contributors) included a number of supremely talented caricaturists and gag writers alongside a few authentic geniuses.

...To be subversive, however, requires a dominant culture to subvert. Mad was the smart-aleck spawn of the age of mass media, when everyone watched the same networks, flocked to the same movies and saluted the same flag. Without established authorities, it had no reason for being. Like the kid in the back of the classroom tossing spitballs and making fart sounds, a journal of subversive humor is funny only if there’s someone up front attempting to maintain order.

Okay, so far so good. He has stayed on topic but then...the TDS attack happened and poor Von Drehle went far afield:

We now live in a time when everyone’s a spitballer, from the president of the United States on down. America elected the world’s oldest seventh-grader in 2016; we knew what we were getting from the earliest days of his campaign. Asked about one opponent, the successful business executive Carly Fiorina, Trump replied, “Look at that face! Would anyone vote for that?” He bullied the rest of the field with stupid nicknames. The hijinks continue to this day. Recently, Trump play-scolded Vladimir Putin as the Russian president smirked in reply. “Don’t meddle in the election, please,” said Trump — as if the two of them had been caught giving wedgies and were forced to apologize. What, us worry?

Trump is obviously living so rent-free in Von Drehle's obsessed mind that there should be a Mad cartoon showing his brain covered with little orange-haired men singing "What, Me Worry?"