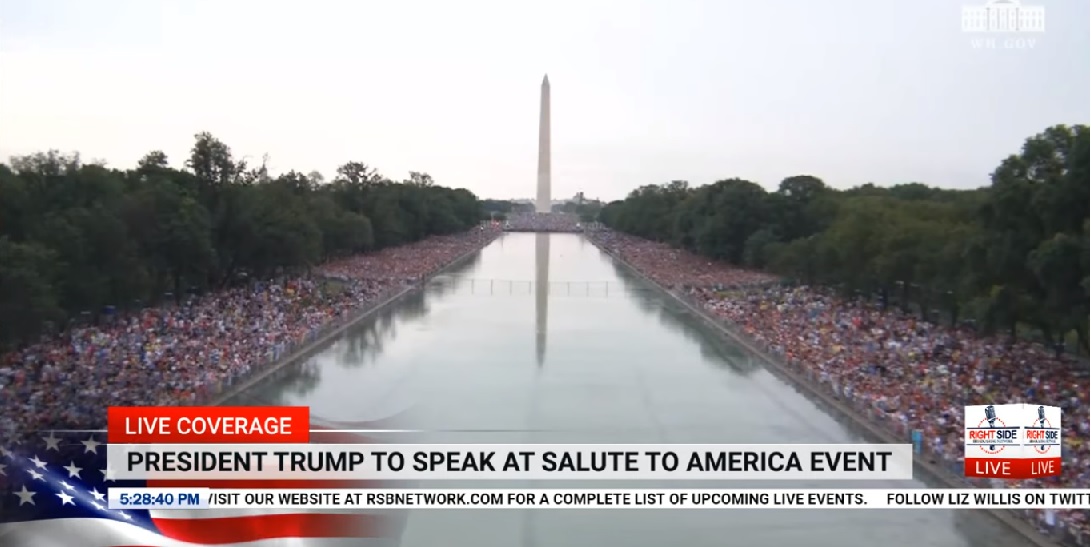 Unlike many of her fellow leftists, such as Alexandria Ocasio-Cortez who despite the visual evidence absurdly claimed that the July 4 speech by President Donald Trump was "poorly attended," Salon politics writer Amanda Marcotte admitted the truth about the size of the large crowd. However, while conceding the evidence was true, Marcotte rationalized it by claiming the big turnout was due to..... racism.

You could tell where Marcotte's fantasies were leading just by reading the subtitle of her article, "Don't forget this: Trump's fans are loyal, and stuck with him through his Fourth of July fiasco": "The grim determination of Trump's crowd was more terrifying than any Nuremberg-style spectacle could have been."

Marcotte continued that Nuremberg spectacle shtick with her very first sentence: "It turns out Donald Trump is as good at being Joseph Goebbels as he was at being a casino magnate." She then went on to claim that despite finding Trump's speech boring, the crowd turned out for an ulterior reason: bigotry.

It turns out that Trump's base isn't in this because they're bamboozled by fascist theatrics or swept up in Trump's gaudy, cheap version of glamour. What this has always been about for the Trumpers is making a stand for white supremacy and male domination. While they may indeed long for some cheesy bombast, they will continue to stand there on a drizzly evening, even when all the glitz is stripped away and their reality TV leader is looking lame behind a wet barricade.

This is important: What drives the Trump base isn't actually Donald Trump himself. It's the bigotry. Everything else is gravy.

And to make her detached from reality point, Marcotte tries very desperately to convince the reader that Trump is a terrible speaker so only the racism of the crowd could explain the big July 4 turnout at the National Mall.

He's incoherent and he rambles; his audience often appears lost, confused and not especially interested. That is true at every single MAGA rally and was true at Thursday night's event in Washington.

After assuring us that Trump is boring she returns again to why the big turnout at this and other events where Trump is the speaker that his fans find somehow uninteresting:

...Ultimately it doesn't matter what Trump said, beyond the faint satisfaction liberals may feel watching his supporters endure boredom. Trumpism isn't and has never been about Trump. It's about those who wish to impose their vision of white supremacy and male dominance on an America they fear might actually be starting to live up to its values of freedom and equality. It's about trolling the liberals by hijacking a site famous as a symbol of anti-racism for their authoritarian message.

Yup! A yuuuuuge turnout to on the National Mall to listen to Trump's speech, but to Marcotte, they were there because of their racism.