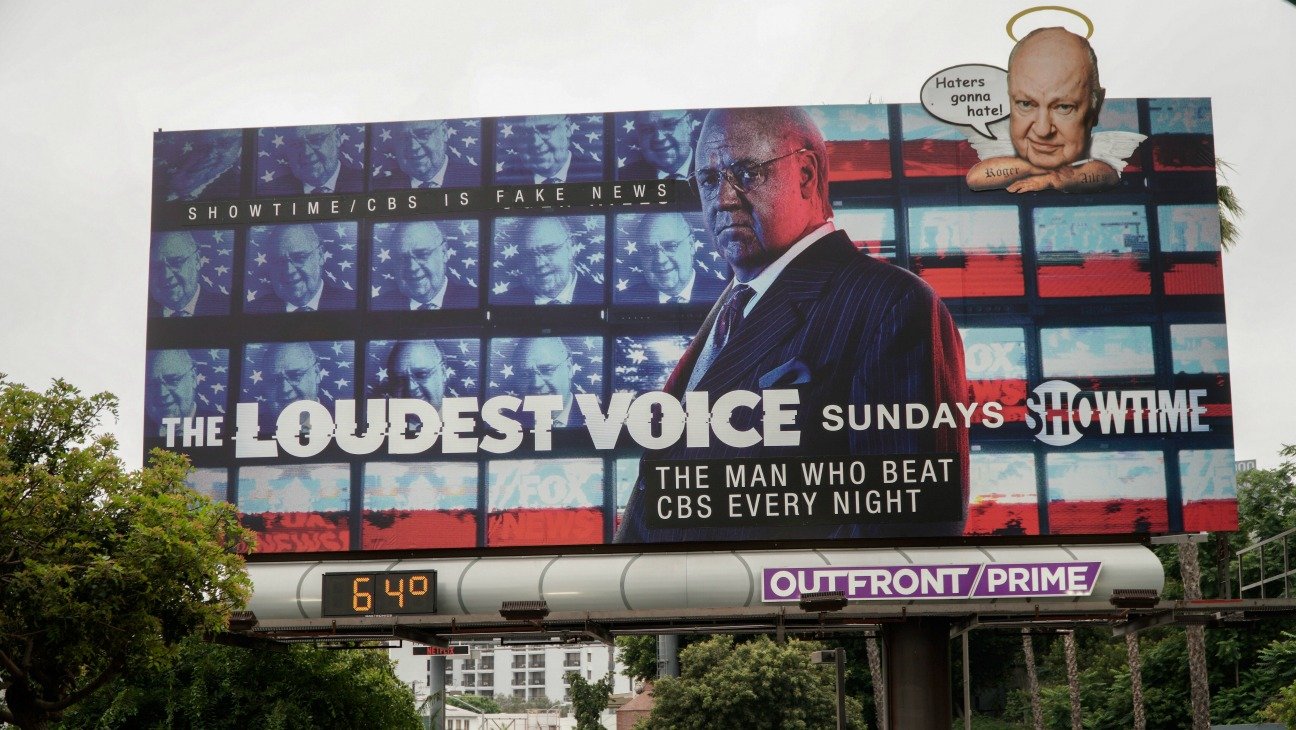 How "brave" of Showtime to produce a series based on the man whose Fox News beat the company that owns them consistently in the ratings, CBS. The series in question is the Showtime version of Roger Ailes as portrayed by Russell Crowe.  Showtime, obviously proud of their character assassination portrayal of Ailes in The Loudest Voice, put up a billboard plugging the series on Sunset Boulevard.

Can you guess what happened next? If you guessed hilarious sabotage yet again by Los Angeles street artists you would be right. The Hollywood Reporter wrote up the details in "Showtime's Roger Ailes Show Billboard Hijacked in L.A. by Conservatives" on Wednesday.

Showtime marketing executives may want to take a closer look at a giant Los Angeles billboard that promotes their Roger Ailes miniseries, The Loudest Voice, because it's not what they paid for.

They sure should check it out because now there is a lot more truth in advertising as you can see in the picture.

While the billboard has always featured the title of the series along with the Showtime logo, underneath that text Wednesday appear the words: "The man who beat CBS every night." (Showtime is owned by CBS.)

Ailes died in 2017 and the red, white and blue billboard also now features him as an angel hovering above Crowe, his name tattooed on his arms with a thought bubble reading: "Haters gonna hate!"

Other text added to the billboard reads: "Showtime/CBS is Fake News."

And now some information about the merry pranksters who spoke truth to mainstream media power:

The billboard was altered before the sun came up Wednesday by a group of conservative artist-activists who go by the name The Faction. They are best known as the secretive troupe that laid down dozens of Donald Trump stars on the Hollywood Walk of Fame last year to more than replace the president's real star, which has been destroyed many times by protesters.

...As to why they went through the expense and trouble of severely altering a Showtime billboard, a member said their intent isn't necessarily to defend Ailes but to indict CBS News and other outlets they deem biased on a host of subjects, including "Russiagate" and coverage surrounding the Brett Kavanaugh Supreme Court hearings.

So what are the chances that Showtime will ever produce a series based on the exploits of former CBS CEO, Les Moonves? How about somewhere between nil and none? He has become as much a non-person there as fake news Dan Rather (also no Showtime series about the latter).