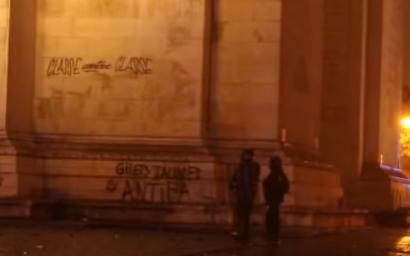 This week, we have seen how the networks avoided the connection of Les Gilet Jaunes or Yellow Vest protests in Paris to the global warming ideology promoted by French President Emmanuel Macron (which led him to impose a fuel tax that he was forced to back away from). However, another bit of misreporting from much of the mainstream media involves properly identifying who it is during these Yellow Vest protests that are doing the looting and desecration of monuments with graffiti.

Fortunately we have an alternative Canadian news source, The Rebel, which has reported from Paris on who the perpetrators are. Their revelation is something you won't see in much of the rest of the media in either Canada or the U.S.A. which have left the impression that the lootings and descrations were done by the regular Yellow Vests.

The first Rebel Media video is a report from Martina Markota who shows us the obvious self-identifications of the Anarchists and possibly Antifa, which somehow the MSM seemed to overlook while blaming the Yellow Vests in general for those crimes. (See above: One image clearly shows a graffiti tagging that read "Antifa.")

Markota made a good point at the end of her report about if you are a French patriot, why would you desecrate their most important monument, the Arc de Triomphe, with graffiti.

Her Rebel Media colleague, Jack Buckby, added an observation on December 4 about the misreporting on the destruction by the media:

What I noticed is when you see these shops that have been burned down they are tagged with graffiti and that's Antifa and Anarchist graffiti. Now of course the media is going to look at the chaos in Paris. The fact that the streets of Paris are literally burning and they're going to conflate it all with the Gilet Jaunes. They're going to say it's all because of these tax protesters and it's just not true.

It turns out that Buckby was exactly right about how the media has reported on the destruction. An example is this December 1 Associated Press report:

France's most violent urban riot in more than a decade engulfed some of central Paris on Saturday as "yellow jacket" activists torched cars, smashed windows, looted stores and tagged the Arc de Triomphe with multi-colored graffiti.