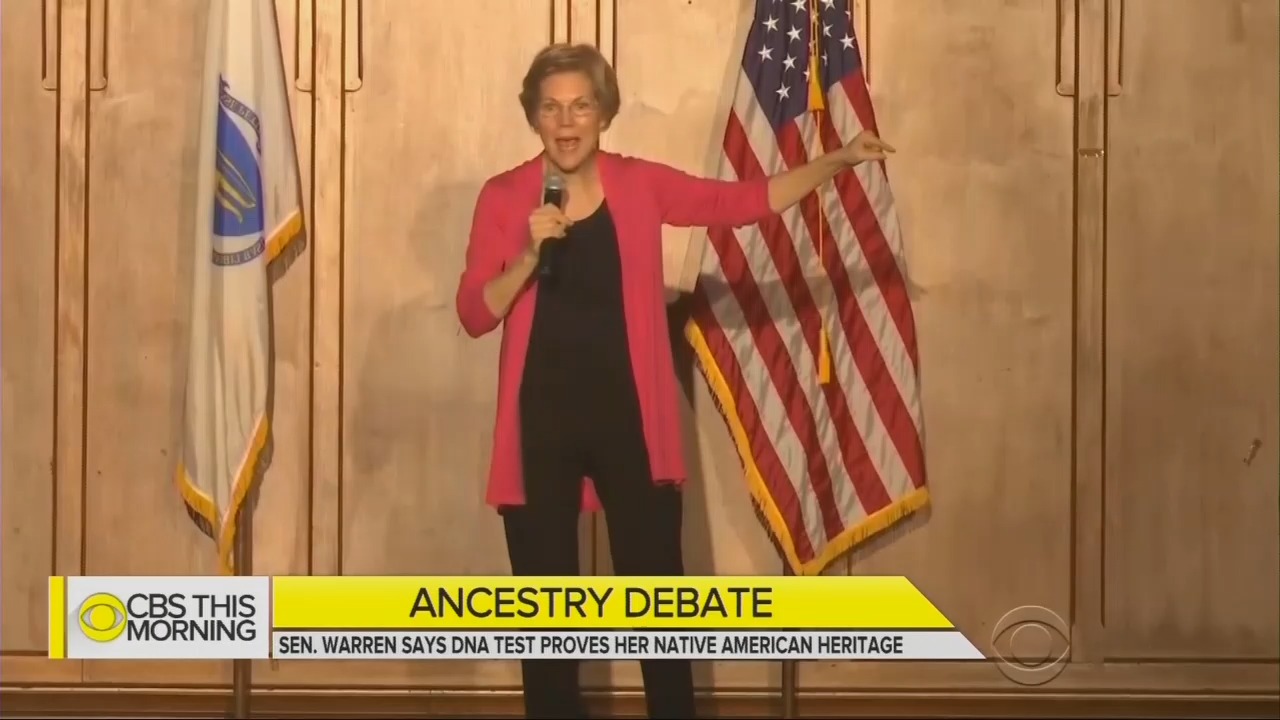 The October 15 Boston Globe makes an attempt in "Warren releases results of DNA test" to establish the American Indian bonafides of the Massachusetts senator but ultimately the most Indian thing about her might be the name of the state she represents.

Senator Elizabeth Warren has released a DNA test that provides “strong evidence’’ she had a Native American in her family tree dating back 6 to 10 generations, an unprecedented move by one of the top possible contenders for the 2020 Democratic nomination for president.

Warren, whose claims to Native American blood have been mocked by President Trump and other Republicans, provided the test results to the Globe on Sunday in an effort to defuse questions about her ancestry that have persisted for years. She planned an elaborate rollout Monday of the results as she aimed for widespread attention.

The analysis of Warren’s DNA was done by Carlos D. Bustamante, a Stanford University professor and expert in the field who won a 2010 MacArthur fellowship, also known as a genius grant, for his work on tracking population migration via DNA analysis.

He concluded that “the vast majority” of Warren’s ancestry is European, but he added that “the results strongly support the existence of an unadmixed Native American ancestor.”

The inherent imprecision of the six-page DNA analysis could provide fodder for Warren’s critics. If O.C. Sarah Smith were fully Native American, that would make Warren up to 1/32nd native. But the generational range based on the ancestor that the report identified suggests she’s between 1/64th and 1/1,024th Native American. The report notes there could be missed ancestors.

Undergoing the test and releasing the results reveal how seriously Warren is taking the attacks from Trump, who has been able to effectively caricature and diminish his national foes via nicknames and conspiracy theories.

It appears that the Boston Globe originally overestimated the amount of American Indian blood that Elizabeth Warren MIGHT have since they issued a correction that comes off as a punchline at the end of their story:

Correction: Due to a math error, a story about Elizabeth Warren misstated the ancestry percentage of a potential 6th to 10th generation relative. The generational range based on the ancestor that the report identified suggests she’s between 1/64th and 1/1,024th Native American.