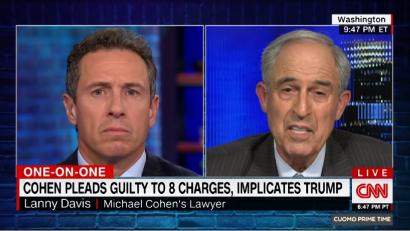 Even liberal Politico finds untenable CNN's refusal to correct their July 26 "scoop" fed to them by Michael Cohen's lawyer Lanny Davis that President Donald Trump knew in advance about the Trump Tower meeting that included his son and a Russian lawyer, which was subsequently denied by Davis' August 22 admission that he did not know if this was true.

Politico writer Jason Schwartz also wondered if Davis can continue to appear on network news shows due his part in knowingly spreading what CNN stubbornly refuses to correct despite the fact that they initiated this fraud on August 29 in "Lanny Davis burns reporters. Should they still give him a megaphone?":

Lanny Davis, in his role as lawyer and spokesman for Michael Cohen, has copped to misleading journalists, admitted he made false statements on national television and generally caused headaches for reporters who’ve used him as a source.

It’s the latest example of a perennial Washington question that seems to have become more pressing in the Donald Trump era: How should journalists handle sources who are in powerful news-maker positions, but who are also known to be dishonest?

In the case of Davis, the rare source who publicly admits to misleading reporters, the debate is even more fraught.

In the case of CNN the debate should be even more fraught than that since despite Davis' admission, CNN still stands by their fake news story:

Frank Sesno, director of The George Washington University’s media school and a former CNN reporter, said networks should avoid giving Davis a platform as a pundit, but his position representing Cohen could lead to situations where it would be legitimate to bring him on for interviews.

“He is damaged goods. His value as a source will be suspect. Anytime anyone puts him on the air, he is going to be grilled from five different angles,” Sesno said. “You don’t put him on the air hoping you’re going to get information. You would only put him on the air if he’s able to demonstrate before going on the air that he’s got something that’s going to advance the story, that is based on actual fact, that it can be documented with either documents or some kind of corroborated testimony from somebody else and he’s the only one who can do it.”

CNN is also damaged goods. Unless they correct their story supplied by Davis who subsequently denied it was true, the news they broadcasted should be treated as fake news unless corroborated by responsible news outlets:

Bill Grueskin, a Columbia School of Journalism professor who previously served as one of The Wall Street Journal’s top editors, agreed, saying that any journalist quoting Davis should put his comments in context by pointing out his credibility problems.

CNN should be put in context by pointing out their credibility problems:

The trouble for Davis began with a CNN story in July, which reported, according to “sources with knowledge,” that Cohen, the former lawyer and fixer for Trump, had information that the president knew in advance about the June 2016 Trump Tower meeting in which top campaign officials, including Donald Trump Jr., met with a Russian lawyer in hopes of receiving dirt on Hillary Clinton.

The network also reported that Cohen was willing to make that claim to special counsel Robert Mueller.

Several other news outlets, including POLITICO, confirmed CNN’s report, and some have since acknowledged they relied on Davis as an anonymous source.

On Sunday, though, The Washington Post reported that Davis was backtracking, saying that Cohen did not actually have that information about the Trump Tower meeting in 2016.

A day later, Davis told BuzzFeed that he was one of CNN’s sources, and he admitted that he was not truthful a week earlier, when he told Anderson Cooper on CNN that he was never a source on any Cohen-Trump Tower stories.

CNN has stood by its initial report, written by Watergate legend Carl Bernstein and reporters Jim Sciutto and Marshall Cohen, saying it was based on multiple sources. The network has taken heavy criticism over its handling of the story from Fox News, Trump and journalists such as Glenn Greenwald.

CNN’s original story said Davis declined to comment, and CNN has not explained whether it “double-dipped” by also using him as an anonymous source, as Davis now claims. Kathleen Culver, director of the Center for Journalism Ethics at the University of Wisconsin, said that if Davis was in fact a source, “that is a problem.”

On Tuesday, Bernstein and Sciutto published a follow-up story, detailing how Davis’ story has changed and saying that they stood by their original reporting. But the pair did not say whether Davis was a source for their original report, saying only that Davis “now says that he also was one of the sources for CNN’s story.”

Again, a modified limited hangout by CNN is still a coverup of fake news:

Culver said that CNN should be more open to explaining the mechanics behind such a fraught story.

“CNN not being transparent about what is going on and what it’s said to its own audience, I think it makes it even more difficult for people to understand and to find things credible,” she said.

CNN is neither transparent nor credible as evidenced by this disaster that they're trying to wish away.