One of the symptoms of extreme Trump Derangement Syndrome is making comparisons to Watergate in the desperate hope that President Donald Trump can be removed from office. Former New York Times columnist and drama critic Frank Rich too such fantasies to an extreme in his August 23 New York magazine article, building up an entire imaginary world in which his obsession with the removal of Trump from office is revealed down to the smallest of Watergate-related details.

So let us now enter the fervid imagination of Rich's Trump-obsessed mind as the magazine's Alex Carp referred Rich back to his Watergate fantasies with the very first sentence of the melodramatically titled, "The Endgame for Trump Comes Into View."  Carp asked: 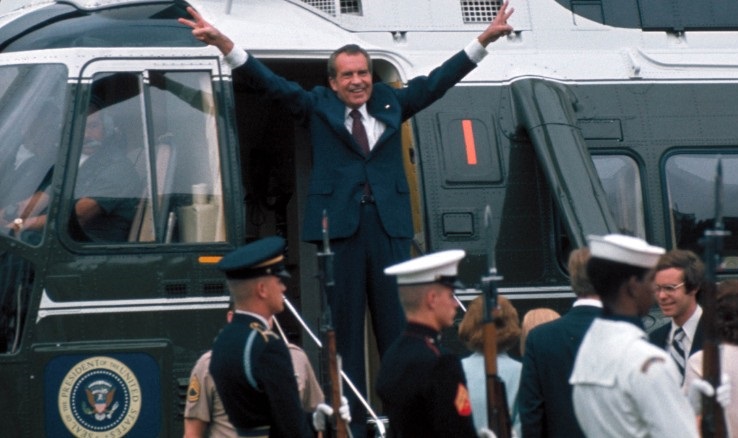 When you looked back on Watergate last summer, you found that the scandal unraveled incredibly slowly until, in August 1974, Nixon’s presidency collapsed all at once. This week, Donald Trump’s former campaign chairman Paul Manafort was convicted on multiple counts of fraud and Michael Cohen, his personal lawyer and fixer, pleaded guilty to campaign finance violations he says he committed “at the direction of the candidate.” Have we reached the August 1974 of the Trump presidency?

Rich thinks Trump's demise is on a "comparable timeline" to Nixon's, except that would be in August of 2022 to be comparable:

RICH: I do believe, as I wrote last summer, that Trump’s path to “a premature exit from the White House in disgrace” is “on a comparable timeline” to Nixon’s. The tumult of August 2018 hasn’t finished off his presidency, but the endgame looks closer by the day. We  know we’ve reached a nadir when the president’s lawyer is reduced to claiming that “truth isn’t truth” and even a lowlife crook like Michael Cohen can take the moral high road by professing he’d rather go to prison than be “dirtied” by a Trump pardon.

And if Trump is still around in August 2019, would that be the endgame of Rich's Watergate fantasies?

It is important to remember that the unrelenting lockstep loyalty of the feckless GOP leadership and the party’s base to Trump are not indicators of his fate. An occasional outlier in the Jeff Flake vein aside, Nixon’s party was wholly loyal to him too. Like today’s Vichy Republicans, they remained loyal despite the indictments of Cabinet members and aides as close to Nixon as Manafort, Cohen, and Michael Flynn have been to Trump. They remained loyal after the nation was riveted by the devastating Watergate hearings of the summer of 1973...

This is Rich attempting to grapple with the inconvenient fact that even if the House impeaches Trump, it would still take at least 17 Republican senators (assuming all Democrats vote to convict) to actually remove the President from office.

As late as the end of July 1974 — less than two weeks before Nixon’s August 9 helicopter departure from the White House lawn — most Republicans on the House Judiciary Committee voted against all articles of impeachment. Many Republicans on the committee continued to support him even after the August 5 release of the “smoking gun” tape revealing that Nixon had ordered a cover up of the Watergate crimes.

Rich demonstrates a shocking lack of Watergate knowledge here in the midst of his fantasies. The fact is that all the Republicans on the House Judiciary Committee who voted to support Nixon reversed themseves after release of that tape to announce they would vote in favor of an article of impeachment when it reached the House.

Since the main purpose of Special Counsel Mueller is to find Russian collusion with the Trump campaign, are we to believe such a "smoking gun" tape of that exists?

"Don't worry. Tom Arnold is on it and I'm Tom Arnold."

With all the debate about whether Trump could or should be impeached this very minute — a wholly theoretical debate as long as the GOP controls Congress — we tend to forget that Nixon was never tried for impeachment. He quit once he realized he didn’t have the votes to survive such a trial and when he no doubt realized that he was in criminal jeopardy.

But, whether Trump recognizes it or not, the fact remains that his main and perhaps only hope for clinging to office is that Republicans hold the House in November. Polls — and the history of midterm elections inflicting damage against the party occupying the White House even during non-criminal presidencies — tell us that a blue wave is more likely.

No matter what happens in the House in November, you still have that insurmountable Senate hurdle, Frank. But continue with your entertaining fantasies.

The GOP and the Trump Organization alike will be on the ropes, and in full panic. This is evident from the wrongdoing already apparent — indeed, already the subject of indictments and guilty pleas. Yet to be factored in, of course, are the unknown findings of the Robert Mueller investigation, which could include not only treasonous conspiracies with the Russians to steal an election but additional crimes that beggar the imagination.

Yeah, about that Russian conspiracy to steal an election... Mueller reported twice this year that he had found NO evidence of any such collusion with any American citizen. Of course, maybe Tom Arnold will find that evidence.

If there is a shocking upset GOP victory in November, then all bets are off: America is in worse trouble than we already think and possibly in an existential fight for survival.

Perhaps even resulting in Frank Rich's confinement to a rubber room when Trump's premature demise fails to happen.