HuffPost Slams Democrat Congressman For Not Being Radical Enough

Sorry, Seth, but the Democrats have now fully embraced the S-word they previously avoided so that means the Bolshevik wing of the party, along with their media allies, is purging mere Mensheviks such as yourself.

In the wake of Democratic Socialist Alexandria Ocasio-Cortez upset victory against an establishment Democrat on Tuesday, a reckoning is now taking place against those perceived as even slightly less than full radical. Among those apparently being slammed for their supposed moderation, despite a straight liberal voting pattern, is Democrat Congressman Seth Moulton. Enabling poor Seth's purge from what are now mainstream Democrats is HuffPost reporter Daniel Marans with his June 29 heresy alert, As Democrats Look Left, A Massachusetts Congressman Doubles Down On Biography:

A day after after a populist challenger knocked off one of the most powerful Democrats in the country, in part for taking too much corporate campaign cash, Rep. Seth Moulton, a moderate liberal who has raised money from Bain Capital in his capacity as a would-be Democratic Party kingmaker, convened reporters on Wednesday in a conference room just outside Capitol Hill for an announcement.

Guilty! Accepting money from any organization with the word "Capital" in it is now taboo in the new Socialist Democrat (or Democratic Socialist) party. The only Capital now allowed is "Das Kapital."

Moulton, 39, styles himself a New Democrat, but given where the energies in his party lie at the moment, he 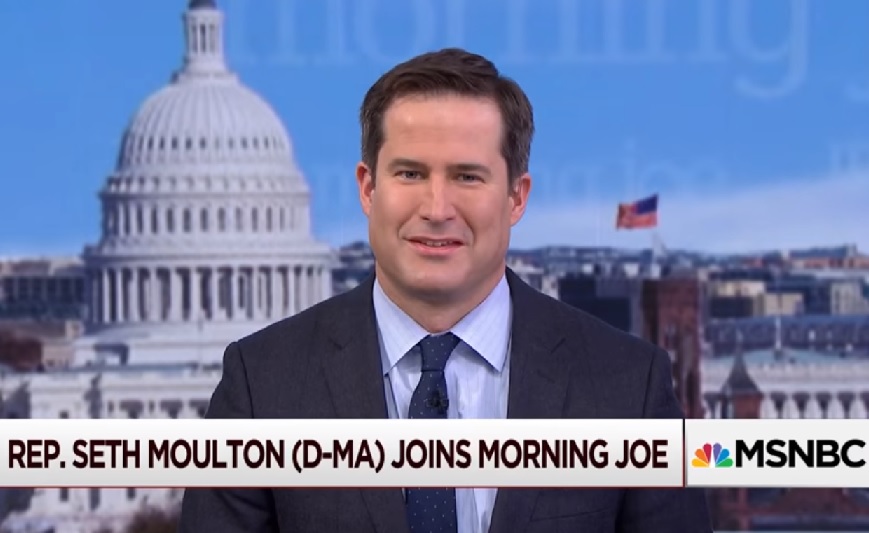 sounded very much like the old guard. He was there to talk about his Serve America PAC, which helps elect veterans. The PAC added 12 candidates to its list of endorsements and expanded its endorsement criteria to include people who have performed other types of public service. The PAC is endorsing state and local candidates for the first time; four down-ballot contenders are among the 12 additions.

That's pretty much Moulton's shtick. Get veterans to run for office as Democrats while mouthing platitudes that sound moderate but once elected vote hard left just like the Democratic Socialists.

Fourteen hours earlier in New York City, Alexandria Ocasio-Cortez, a 28-year-old democratic socialist, unseated Rep. Joe Crowley, a powerful Democrat believed to have designs on the House speakership. Her victory demonstrated the virtues of a left-wing platform grounded in frankly stated values rather than in Moulton’s pragmatism for pragmatism’s sake.

Moulton tries to be as uncontroversial as a student running for high school president on a platform of "school spirit." However, that still doesn't keep him from voting against common sense policies such as the Trump tax cut which helped create our current economic boom. Even a "moderate" democrat can go just so far in openly opposing their party's socialist ideology.

Moulton’s supposedly nonideological approach is a peculiar one at a time when progressive idealism and opposition to the corrupting influence of money in politics have become increasingly dominant themes in the Democratic Party.

And since Moulton is already making forays into New Hampshire, we pretty much know what office he will be running for in 2020. Unfortunately, he might be facing a shocker when the radicalized Democrats boo him during their debates for not favoring the immediate abolishment of ICE as other potential 2020 candidates such as Kristen Gillibrand are already urging.

Over the course of the entire election cycle, the Democratic establishment has had more success elevating its preferred candidates. But even many establishment-backed candidates and mainstream incumbents have either signed onto the once radical positions of Medicare for all, free college and a $15 minimum wage or shifted closer to them than would have been imagined as recently as two years ago.

Of course, Moulton’s nonideology is itself an ideology. He is is a member of the pro-business, fiscally moderate New Democrat Coalition.

If he is a fiscally moderate pro-business type then why did he vote against the pro-business tax cut? No matter. In today's Socialist Democrat party just the appearance of not going full Lenin is enough to be branded a political heretic.

Then there’s Moulton’s big-dollar fundraising model. It’s hard to believe that he is not at least a little bit ideologically constrained by his donor base.

Has he created a Moulton Global Initiative yet?

Marans has a final dig at Moulton:

As for Ocasio-Cortez’s win, Moulton cautioned against making too much of it.

“It’s dangerous,” said the New Democrat, “to read too many national implications into this very low-turnout primary in New York.”

It appears that the Socialist Democrats can now rely on their media allies such as Marans to cleanse their party of ideological impurity.