New York magazine contributor Andrew Sullivan has a well deserved reputation as being an unhinged liberal anti-Trumper. However, unlike most leftists, Sullivan does experience brief moments of mental clarity. Such a moment occurred today when Sullivan experienced extreme foreboding about the outcome of next weeks gubernatorial election in Virginia. He fears that the Democrat stance on immigration has a good chance of leading to the defeat of Ralph Northam in How the Democrats Are Failing the Resistance: 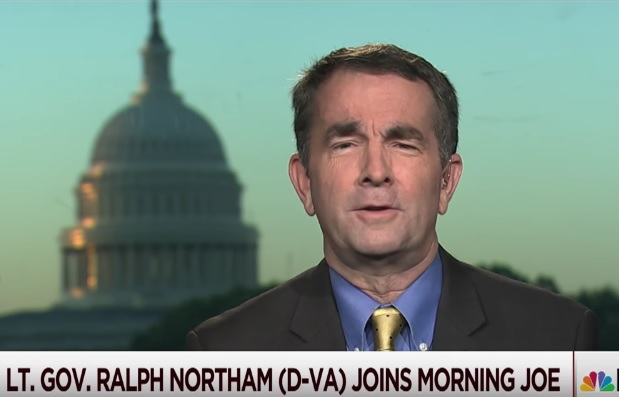 Ed Gillespie and Ralph Northam will be duking it out in the Virginia governor’s race in an evenly balanced, but Democratic-trending, state. It has morphed into a real-life test of how strong Trumpism will be in 2018, how effective the Democrats are as an alternative, and the future of the country. I don’t know what the result will be. But it is not looking good — for the Democrats or the country as a whole.

Northam seems to me almost a classic Democratic politician of our time. I have no idea what his core message is (and neither, it seems, does he); on paper, he’s close to perfect; his personality is anodyne; his skills as a campaigner are risible; and he has negative charisma. More to the point, he is running against an amphibian swamp creature, Ed Gillespie, and yet the Washington lobbyist is outflanking him on populism. Northam’s ads are super lame, and have lately been largely on the defensive, especially on crime, culture, and immigration. He hasn’t galvanized minority voters, has alienated many white voters, and has failed to consolidate a broader anti-Trump coalition. In Virginia, Trump’s approval rating is 38/59, but Northam is winning only 81 percent of the disapprovers, while Gillespie is winning 95 percent of the approvers. Northam’s early double-digit lead has now collapsed to within the margin of error.

...go to Northam’s website and you see a near-copy of Clinton’s agenda last year. Drenched in wonky micro-policies, one of its exhausted themes is actually “Working Together.” If you plumb the message, behind various poll-tested good-government bromides, he even has policy proposals on concussions and STEM curricula, and a smoking ban. This is Establishment Democratic boilerplate. And Democratic turnout, in response, looks wobbly, especially among minority voters.

Enter the resurgent activist left. Yes, the party needs more direct aggression and energy and left-populism. But the Latino Victory Fund, worried about low Latino enthusiasm, put out an ad last week that shows how much of the energy in the party is now dominated by the fight against “white supremacy.” And so the LVF ad would give your average Vox or Coates reader an intersectional orgasm — while dooming the party on the ground. It depicts a white man in dark glasses in a pickup truck wth Gillespie and tea party bumper stickers, brandishing a Confederate flag, and driving aggressively through a suburban neighborhood, terrifying young Latino and Muslim kids, and forcing them into a back alley. Just as this Republican terrorist seems about to murder the children, the scene changes and we realize that this was all a nightmare for the kids. And they wake up. This, the ad hammers home, is what the “American dream” means for the GOP. Cue to scenes from Charlottesville.

The ad was aimed at Latino voters. But, of course, it went viral, instantly erasing Northam’s relatively clean image, and tripling contributions to Gillespie’s campaign overnight. It helped cement the Trump base’s support for Gillespie. It seemed to imply that every Virginia Republican is a terrorizing white supremacist, and makes the fatal Clinton mistake of attacking a swath of actual voters. And, of course, it was about immigration. The GOP are on the smart side of this issue; the Democrats still don’t have a clue. In one final flailing, Northam first distanced himself from the ad, and then was shown to have helped finance it. Then the GOP managed to ambush him on the bogus “sanctuary city” issue. In the closing stages of the campaign, he said he would now veto any attempt to establish such a law-free enclave, a position he had once voted against. Even now, it appears, the Democrats have no practiced response to a GOP attack on this question. They don’t want to offend Latinos, and they don’t want to alienate whites. So they twist in the populist wind. Are they capable of focusing on economic populism and a defense of the working classes against GOP plutocracy? At this point, the answer is no.

I hate to be the one to tell you, Andrew, but just by stating that the GOP are on the "smart side" of the immigration issue means you can soon expect leftist denunciation of your Thought Crime.

I can only hope it’s a wake-up call to the Dems. In 2017, they are either useless or actively counterproductive in the struggle to resist right-authoritarianism. They have learned nothing from 2016. Their intelligentsia seems determined to ensure that no midwestern whites ever vote for the party again. Their public faces are still Hillary Clinton, Chuck Schumer, and Nancy Pelosi. They still believe that something other than electoral politics — the courts, the press, the special counsel — will propel them back to power. They can’t seem to grasp the nettle of left-populism. And they remain obsessed with a Russia scandal that most swing voters don’t give a damn about.

Pray to the holy image of St. Robert of Mueller to deliver us from the Trumpocalypse.