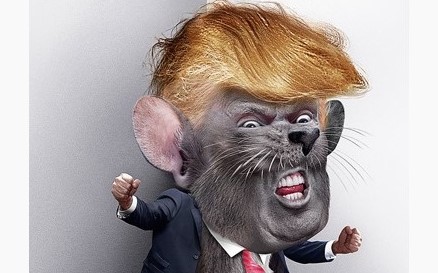 Vanity Fair's James Wolcott exemplifies the Trump-loathing panic of the liberal media. In the magazine's November issue, he fantasizes not only about the early removal of President Donald Trump from office but also about the "reckoning" (vengeance) that he would dearly love to subject upon his supporters. Wolcott presents his deranged vengeance fantasies in "WILL WE EVER RETURN TO NORMAL AFTER TRUMP?" The magazine headline under the Trump-as-a-rat cartoon is "THE TYRANT TRAP."

And if Trump not only lasts to the end of his first term but is also re-elected, we can fully expect Wolcott to be strapped down on a gurney and rolled into a permanent Rubber Room. Wolcott believes Trump should be deposed immediately, and we should review the damage as if it was another 9/11:

The moment Trump leaves the White House for early retirement, jail, a sanitarium, or a Russian refuge, let the reckoning begin. Cue the exodus of his cronies from the Cabinet and commence the shunning. The Trump family itself should be as unwelcome in what passes for society as Bernie Madoff at a Bar Mitzvah. Pay no heed to those pious owls in politics, the op-ed pages and cable-news panels—pastoral Voices of Civility such as Jon Meacham and David Gergen—who will caution that “now is not the time” to be raking over the recent past, casting recriminations, and turning Schadenfreude into tasty casseroles; the nation must move forward and let the healing process begin. To such doily knitters and thumb twiddlers, it’s never the right time to sift through the debris, apportion responsibility, and name the guilty parties; this is why it took more than a year to establish a 9/11 commission, and its final report was analytical, rhetorical mush. The day after Trump is deposed will be the day to get cracking on addressing what got him to where he never should have been.

That "reckoning" sure sounds like flat out vengeance for daring to have a political opinion contrary to that of Wolcott and his fellow liberals. We'll need a "de-Nazification" program for Trump supporters:

Post-Trump, the country needs its own, domestic version of the de-Nazification program established in Germany after World War II, an inquiry into how so many alleged neo-Nazi, white-supremacist sympathizers had input into this presidency, and their connection with neo-Nazi and nativist movements overseas. Trump has legitimized the hate militias like no president ever before, one of his many blighting legacies and perhaps his most lasting. The domestic threat posed by white-supremacist militias and other violent extremists armed to the steel teeth has been minimized by Republicans, who, jerked around by their Fox News puppet masters, prefer fulminating against Black Lives Matter and antifa street fighters. But white people’s grievances are always given precedence, reflecting the racial makeup of newsrooms and corporate hierarchies.

This is the same writer who rooted for a coup against Trump by the Deep State in March: "Go, State, Go!" Wolcott is such an energetic fantasist that he imagines Laura Ingraham as a Nazi:

When Laura Ingraham seemingly snapped a Sieg heil! salute at Trump’s giant-screen image at the Republican convention, it was a signal that a rabid strain of Fascist flirtation had been reborn—and mainstreamed.

Seemingly but not actually. The Daily Wire revealed the truth of what actually (not seemingly) happened in No, Idiots, Laura Ingraham Didn’t Give A Nazi Salute:

Radio host Laura Ingraham gave a passionate, full-throated endorsement of real estate mogul Donald Trump at the Republican National Convention, and a bunch of idiot leftists thought she made gave a Nazi salute.

...Except that it's incredibly obvious from watching the video of her speech that Ingraham is clearly waving to the audience, not emulating a Nazi salute.

A final tidbit from the dark recesses of Wolcott's vengeance-filled mind, where he imagines Trump die-hards as Japanese soldiers who don't realize World War II is over, and unfurls his contempt for the flyover-state booboisie in their stupid clothes, eating their stupid food:

This sentimentalization of the Loyal Trump Voter, whose rationale for standing by the president is often cradled in incoherence and plain, proud ignorance with a large chunk of stubborn pride, is the latest extension of the press’s centering of the White Working Class in the national narrative, no matter how much the demographics and the complexion of the country change. Every election cycle, eastern reporters ritualistically venture into caucus and primary states such as Iowa and New Hampshire on Norman Rockwell safari to file copy from the diners and truck stops on “real Americans” in plaid jackets and tractor caps with heartland values and comfort-food appetites. It is time this romance with Ma and Pa Kettle was put out to pasture. Let journalists find other ways to pretend to be in touch with those left behind and clinging to their discredited articles of faith. Otherwise, dec­ades from now, if news outlets as we know them survive, reporters may still be tramping through the hinterlands searching for the last remaining Trump holdouts to interview as if they were Japanese soldiers hiding in the jungles long after World War II ended.

All remaining Trump supporters must report to Room 101 to have their minds fixed.

Vanity Fair editor Graydon Carter celebrated the piece in his Editor's Letter: "It will be psychologically as well as politically momentous when he is subtracted from the White House, whether by his own doing or the Constitution’s. For one thing, 'so much headspace will be opened up'....Yes, the man who came to Washington claiming that he would drain the swamp will, when he exits, leave the city—and the nation—high and dry, save for a clump of yellow hair clogging the drain."