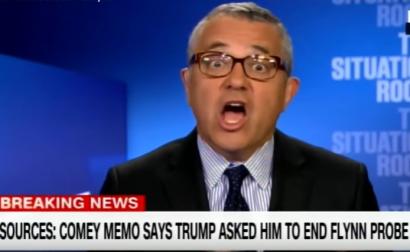 Jeffrey Toobin pretty much let the cat out of the bag about the real desired purpose (by the Democrats and the mainstream media) of the investigation by the new Special Counsel Robert Mueller in the May 19 New Yorker. He basically concedes that there is a good possibility that no criminal evidence of collusion between the Donald Trump campaign and the Russians will be found. What he reveals, and it is no big surprise to anyone who follows politics, is that the information collected during the course of this investigation could be politically damaging to President Trump if it is released.

First Toobin admits that there is a good chance that there is no there there as far as criminal evidence of Trump-Russia collusion:

It may well be difficult to identify any criminal laws violated by the Trump campaign’s contacts with Russia. It will be important for Mueller to investigate, for example, whether anyone associated with the Trump campaign aided and abetted the hacking of e-mail accounts connected to Hillary Clinton’s campaign; that would certainly be a federal crime. But unlike, say, the Watergate investigation, which began with a break-in, it is not immediately clear what crimes may have been committed.

It looks like Toobin has been listening to what such Democrats as Dianne Feinstein and even Maxine Waters have admitted. Namely that there is no evidence yet found of collusion between the Trump campaign and the Russians. However, he quickly jumps to what he considers to be the real main purpose of the investigation: dirt digging to hurt the President.

...regardless of whether Mueller ends up bringing any cases, he will surely collect a great deal of evidence. He may subpoena President Trump’s tax returns. He will almost certainly interview Trump as part of a grand-jury proceeding.

Even if no criminal charges are made over the Trump-Russia collusion about which no evidence has yet been found so far, Toobin holds out the hope that political harm could still be harvested from the Mueller investigation:

If Mueller doesn’t bring any cases, the tax returns and interviews might never be made public; but the contents of both could be included in a report. If and how Mueller chooses to spell out his evidence will be a critical decision that he must make.

As for the question of whether Rosenstein will decide to release the report to the public, the regulation is again unclear. It states that the appointing authority—in this case, Rosenstein—“may determine that public release of these reports would be in the public interest, to the extent that release would comply with applicable legal restrictions.” How will Rosenstein determine whether disclosure is in the public interest? What are the other legal restrictions? Could Mueller include grand-jury testimony, which is usually secret, in his report and, if he did, would Rosenstein later agree to release it? There will be great pressure, at least from Democrats, to release Mueller’s findings. But, based on the regulation, it appears that Rosenstein’s decision on disclosure will be final and unreviewable by any court.

Please, Mr. Rosenstein. Even though no evidence has been found of Trump-Russia collusion, could you please release Mueller's findings such as Trump's tax returns so we could smear him?

Oh, and thank you Jeffrey Toobin for spelling out loud so clearly what most of us have already suspected; the purpose of this investigation for many Democrats and their MSM allies is not to find evidence of Trump-Russia collusion which most of them already know didn't happen. Instead the real purpose is to gather information to politically damage President Trump.