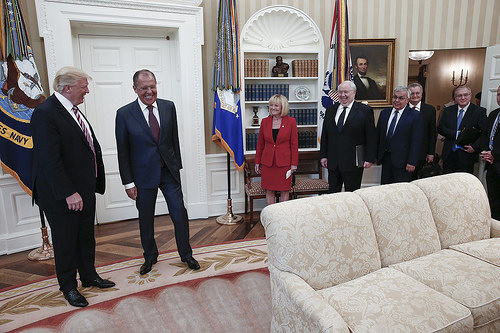 After going full absurd with their speculation on May 10 that a Russian photographer in the Oval Office could have planted a recording device, they doubled down in their absurdity with yet more derangement on the same topic the following day. This time it was their national correspondent Philip Bump who volunteered to make a laughingstock of himself. Bump's hilarious speculation starts with the very title of his article, Here’s how the Russians might have snuck a recording device into the Oval Office.

The Russians would love to place a recording device in the Oval Office, of course, and have a track record of using innocuous-seeming methods to bug their opponents. (Gizmodo noted that the Russians had once had schoolchildren present the U.S. ambassador to Russia with a decorative carving that included a listening device.)

But, really, how much damage could be done? Could an agent actually get away with planting a device in the Oval Office?

Could a Washington Post reporter actually get away with not obsessing on this silly topic?

Todd Morris is founder and chief executive of Brickhouse Security, a company based in New York that works with law enforcement and corporate customers on surveillance and counter-surveillance techniques. Some of Brickhouse’s clients are financial firms that are looking to prevent surveillance of confidential information that could be used to their disadvantage.

When we spoke by phone, I asked Morris to explain how he would plant a recording device in the Oval Office — and how the information would make its way back out.

No surprise if Mr. Morris was thinking along the lines of "Must humor this silly obsessed reporter."

“I would bring in a device roughly the size of a book of matches, very small,” he said. “It would be set up to record on audio record, audio activated. It would store that data locally. And then, within a certain amount of time and in a burst of transmission, it would transmit that to a server.”

Here’s what that accomplishes.

First, it’s small enough to be hidden easily from the Secret Service. (In The Post’s initial report on the meeting, we note that former intelligence officials say that a standard visitor screening on entering the White House might not detect a sophisticated device.) Once in the Oval Office, the device could be slipped out of sight fairly easily.

Hmmm... So when Russian Foreign Minister Sergey Lavrov was shaking hands with President Trump with his right hand...he could have slipped a matchbox surveillance device into the President's pocket with this left hand.

At this point, Mr. Morris brings Bump back to the killjoy reality that he has been avoiding:

“It would eventually be found,” he said. “It is an office that does get an extensive sweep by well-trained professionals” — although not necessarily after every meeting. Such a sweep, he said, would include far more than simply holding up some electronic gizmo that would ping if it detected a signal. It would mean looking in every imaginable place — behind electrical outlets, inside cushions — for anything that might be used to spy on Oval Office meetings. “They really disassemble most of the room,” Morris said.

DRAT! But Bump still refuses to give up on his fantasy...while providing us with yet more comedy:

Knowing that the device would be found, then, Morris’s would transmit a signal out in as quick a burst as possible. This is meant to prevent White House security from detecting the burst — and then tracking down its point of origin. Morris figured that he’d send out the data after about 12 hours, although it would also be useful to send a burst after only a few hours, given that you’d then have captured the conversation debriefing the Russians’ visit.

A note to Philip Bump: Little Orphan Annie Secret Society Decoder Pins are available on eBay. They could be very useful in decoding quick burst Russkie signals from the Oval Office...or your bizarre fantasies.

This hilarious speculation on Oval Office surveillance devices should come as no surprise to anyone familiar with Philip Bump. His over the top Trump derangement was noted a year ago when he angrily used the Brussels terror attack as a platform to slam Trump. Here is a sample of one of his white foam rants:

In the wake of the bombings that killed dozens of people in Brussels on Tuesday, Donald Trump — most likely safely cocooned in his luxurious home at the top of the Manhattan skyscraper he built — called in to Fox News to discuss terrorism and his proposed response.

So which is crazier? Media folks outraged over Donald Trump getting two scoops of ice cream on his pie or the Washington Post obsessively speculating about possible Oval Office hidden surveillance devices?

Exit question: Has anybody in the MSM checked to see if a surveillance device was planted in one (or both) of the ice cream scoops on the President's pie?