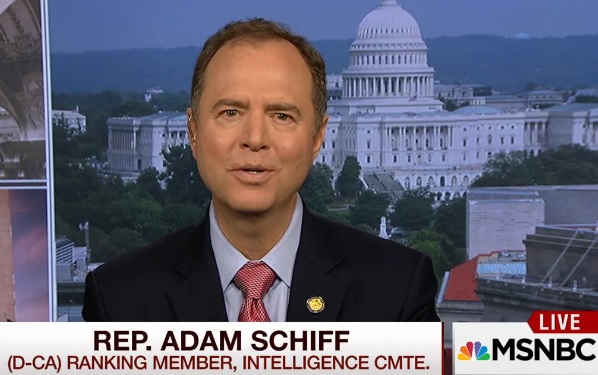 The mainstream media is starting to notice that there have been absolutely no results in the House (or Senate) Trump-Russia collusion investigations. One of those journalists impatient for results is BBC World News America anchor and MSNBC contributor Katty Kay who asked the ranking Democrat of the House Intelligence Committee, Adam Schiff, on the April 28 Morning Joe why there seems to be no progress in their investigation. All Schiff could deliver in reply was basically a meaningless word filibuster that revealed nothing in an attempt to divert attention away from the fact that so far the investigation is a big fat flop.

If you can find answers to Kay's questions amidst all Schiff's bloviations, please reveal them to us mere mortals. You can see Kay ask what happened to the investigation going nowhere at 7:25 in the video below:

KATTY KAY: Congressman, it’s Katty here. Just to be clear and step back a bit, at the moment, there is no evidence that ties anyone in the Trump orbit or the Trump campaign to the Russians in a sense they were deliberately trying to work with the Russians to change the outcome of the American election. That’s why these investigations are so important. A lot of people are starting to ask what’s happened to the investigations, why are they taking so long? Is it the White House that’s stalling the process or is it your Republican colleagues on Capitol Hill who are making this go so slowly?

Or (GASP!) maybe it is because there was no Trump-Russia collusion to keep Hillary Clinton from her rightful inheritance.

ADAM SCHIFF: Well, you know, I would give you really a different explanation and that is this is a massive undertaking, this investigation. It’s global in nature. It’s not only document intensive but witness intensive. And those witnesses are all over the globe. So while we all feel a real sense of urgency about it, it simply isn’t the kind of investigation you can conduct overnight. So I know people are asking, you know, why isn’t the investigation over already, and I think people really need to understand, and I say this as a former prosecutor who handled large white collar investigations, they take time to do. And if we’re not going to do it thoroughly, people aren’t going to be able to rely on the results we come up with. So people are going to have to be somewhat patient. I know how hard that is, believe me, I’d like to get this done yesterday. But it is going to take time to bring all these witnesses in, to review all these records, to look at financial transactions that may span the globe. None of this can be done overnight.

Unfortunately for Schiff, Katty also presses him on the time factor.

KAY: Briefly, do you have a sense of how long?

SCHIFF: I really don’t. That’s probably the most difficult question we get asked. And I don’t think we can put an artificial constraint on it. I will tell you this, one of the biggest constraints we have is that we simply have a small staff, both our committee and Senate Intelligence Committee. But I will also add that I think we are moving forward. We obviously run into a lot of road bumps on the House side. We’ve now overcome those. Mike Conaway and I are working extremely well. We’re sending out letters to witnesses. We’ve agreed about our initial witness list, we are moving forward with hearings. I think we are very much now full speed ahead.

At least Schiff was a bit more concise in his latter answer since he narrowed the investigation time frame down to somewhere between forever and eternity.