Hillary Clinton has just come off the most humiliating political defeat in the memory of most Americans. Despite the unrelenting hype for her candidacy and the absolutely certainty among the mainstream media that she would win the 2016 presidential election...she lost.

Unfortunately the media seems unable to quit with the Clinton hype since now they are going overboard in promoting Chelsea Clinton much to the annoyance of many. Even Vanity Fair, hardly a font of conservative views, is getting fed up with the continuous avalanche of Chelsea hype in the media.

As a result, Vanity Fair contributor, T.A. Frank, is begging the media in a most humorous manner to PLEASE, GOD, STOP CHELSEA CLINTON FROM WHATEVER SHE IS DOING: 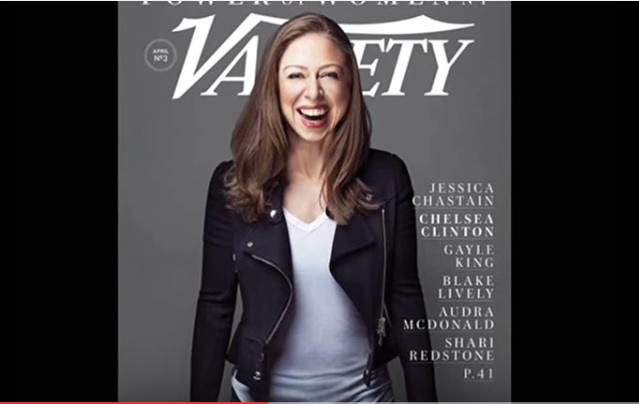 Like tribesmen laying out a sacrifice to placate King Kong, news outlets continue to make offerings to the Clinton gods. In The New York Times alone, Chelsea has starred in multiple features over the past few months: for her tweeting (it’s become “feisty”), for her upcoming book (to be titled She Persisted), and her reading habits (she says she has an “embarrassingly large” collection of books on her Kindle). With Chelsea’s 2015 book, It’s Your World, now out in paperback, the puff pieces in other outlets—Elle, People, etc.—are too numerous to count.

One wishes to calm these publications: You can stop this now. Haven’t you heard that the great Kong is no more? Nevertheless, they’ve persisted. At great cost: increased Chelsea exposure is tied closely to political despair and, in especially intense cases, the bulk purchasing of MAGA hats. So let’s review: How did Chelsea become such a threat?

...Starting in 2012, she began to allow glossy magazines to profile her, and she picked up speed in the years that followed. The results were all friendly in aim, and yet the picture that kept emerging from the growing pile of Chelsea quotations was that of a person accustomed to courtiers nodding their heads raptly. Here are Chelsea’s thoughts on returning to red meat in her diet: “I’m a big believer in listening to my body’s cravings.” On her time in the “fiercely meritocratic” workplace of Wall Street: “I was curious if I could care about [money] on some fundamental level, and I couldn’t.” On her precocity: “They told me that my father had learned to read when he was three. So, of course, I thought I had to too. The first thing I learned to read was the newspaper.”

Chelsea, people were quietly starting to observe, had a tendency to talk a lot, and at length, not least about Chelsea. But you couldn’t interrupt, not even if you’re on TV at NBC, where she was earning $600,000 a year at the time. “When you are with Chelsea, you really need to allow her to finish,” Jay Kernis, one of Clinton’s segment producers at NBC, told Vogue. “She’s not used to being interrupted that way.”

Sounds perfect for a dating profile: I speak at length, and you really need to let me finish. I’m not used to interruptions.

What comes across with Chelsea, for lack of a gentler word, is self-regard of an unusual intensity. And the effect is stronger on paper. Unkind as it is to say, reading anything by Chelsea Clinton—tweets, interviews, books—is best compared to taking in spoonfuls of plain oatmeal that, periodically, conceal a toenail clipping.

While most five year old kids never write letters much beyond a crude crayon drawing supposedly sent to Santa indicating a desired gift, our precious Chelsea wrote a letter discussing policy to the President:

I wrote a letter to President Reagan when I was five to voice my opposition to his visit to the Bitburg cemetery in Germany, because Nazis were buried there. I didn’t think an American president should honor a group of soldiers that included Nazis. President Reagan still went, but at least I had tried in my own small way.

Ah, yes, that reminds me of when I was four and I wrote to Senator John Warner about grain tariffs, arguing that trade barriers unfairly decreased consumer choice.

Okay, you got me there. Now for some more Chelsea wisdom fed to an awe-struck press:

Allow me to laminate those memorable words and carry them in my wallet unto the end of time. And finally, some proposed Chelsea dinner table guests for deadly dull PC conversation uncritically lapped up by the New York Times:

The crude conventional wisdom is that Bill Clinton craved adoration and Hillary Clinton craved power. But Chelsea Clinton seems to have a more crippling want: fashionability—of the sort embraced by philanthropic high society. So you tell The New York Times that your dream dinner party would include James Baldwin, Shakespeare, Franz Kafka, Albert Camus, Jane Jacobs, and Jane Austen, and discussion would be about how “people and communities can evolve to be more inclusive, more kind, have a greater and broader sense of solidarity, while still respecting individual liberties; what provokes or blocks those changes; and what stories might resonate today to encourage us toward kindness, respect, and mutual dignity.” You almost have bow down before someone who could host Shakespeare for dinner and make the agenda wind up sounding like a brochure for the Altria Group. At least Kafka would be on hand to capture the joy of the evening.

I sure hope that dinner table has plenty of bourbon to kill the pain of listening to Chelsea's chat that, despite the notable guests, she would demand to dominate, as the MSM hangs on her every word as if it actually meant something.