You have probably seen the image below of the New York Times January 20 headline. It has gone viral on web and renders absurd the current denials by the Times and much of the rest of the mainstream media that there was no wiretapping of the Donald Trump campaign by the Obama administration. No, there won't be a document out there signed by former President Obama that says something like "I hereby authorize the wiretapping of the Trump campaign." There doesn't need to be. The headline and its January 19 article makes very clear that the previous administration did secretly monitor communications of the Trump campaign. 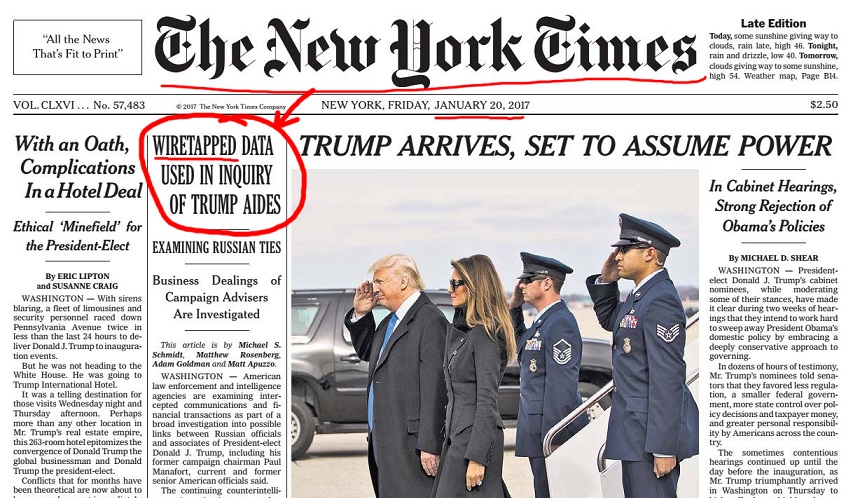 Times reporters Michael Schmidt, Matthew Rosenberg, Adam Goldman, and Matt Apuzzo were quite forthright in describing the wiretapping by the Obama administration:

It is not clear whether the intercepted communications had anything to do with Mr. Trump’s campaign, or Mr. Trump himself.

The F.B.I. is leading the investigations, aided by the National Security Agency, the C.I.A. and the Treasury Department’s financial crimes unit. The investigators have accelerated their efforts in recent weeks but have found no conclusive evidence of wrongdoing, the officials said. One official said intelligence reports based on some of the wiretapped communications had been provided to the White House.

Got that? That headline is out there on the web for all to see and can't be rescinded by the Times.