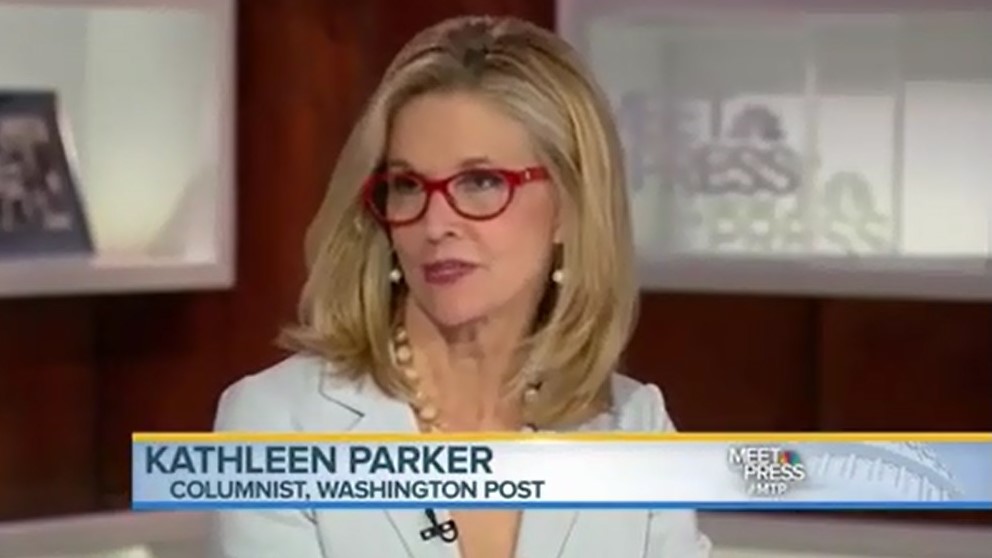 It appears that "conservative" Kathleen Parker of the Washington Post has joined with "conservative" David Brooks of the New York Times in fully embracing the crazy political fantasies of the unhinged left. Both are now predicting the imminent removal of President Trump from office. Brooks predicted Trump would resign from office or be impeached within a year. Parker is very slightly more reasonable by extending that time frame to two years when a new Congress chock full of Democrats elected in 2018 would immediately begin impeachment proceedings against Trump.

Parker takes us on a trip down lunacy lane in her February 10 column:

Good news: In two years, we’ll have a new president. Bad news: If we make it that long.

My “good” prediction is based on the Law of the Pendulum. Enough Americans, including most independent voters, will be so ready to shed Donald Trump and his little shop of horrors that the 2018 midterm elections are all but certain to be a landslide — no, make that a mudslide — sweep of the House and Senate. If Republicans took both houses in a groundswell of the people’s rejection of Obamacare, Democrats will take them back in a tsunami of protest.

I'm sorry, Kathleen, but this past year hasn't been a good one for "good" predictions by MSM pundits. Remember the mantra about "Donald Trump has no path to 270?" Also by specifically citing that the purpose of a Democrat takeover of Congress will lead to impeachment, you only serve to nationalize the election in a big way and provide a yuuuge motivation for the legion of Trump supporters to go out an vote in the off year election.

Once ensconced, it would take a Democratic majority approximately 30 seconds to begin impeachment proceedings selecting from an accumulating pile of lies, overreach and just plain sloppiness. That is, assuming Trump hasn’t already been shown the exit.

Um, I hate to break it to you, Kathleen, but to remove President Trump from office you need not only impeachment in Congress but also a conviction in the Senate. The latter requires two thirds of the Senate...67 votes. In 2018 there is only a grand total of 9 Republican Senate seats at stake. Even in the absurdly unreal outcome of them losing all of those few seats, that still leaves the Democrats 10 votes shy of a conviction. Oh, and you need some actual charges with which to convict a President. For Parker that seems to be a mere technicality since in her December 6 column she wanted to prevent Trump from even assuming office in the first place via unfaithful electors:

Mathematically, only 37 of Trump’s 306 electors are needed to bring his number down to 269, one less than the 270 needed to secure the presidency.

...Electors are scheduled to meet Dec. 19 in their respective states to cast their final ballots. If there are 37 Republicans among them with the courage to perform their moral duty and protect the nation from a talented but dangerous president-elect, a new history of heroism will have to be written.

Bottom line: Parker and her fellow liberals (and "conservatives" such as Brooks) want to remove President Trump from office for strictly political reasons. They are so laughably desperate for this outcome that they have even dreamed up fantasy scenarios as Parker has done. Ironically, their call to elect a Democrat Congress primarily for the purpose of removing Trump may only serve to completely boomerang on them by energizing Trump supporters to cast their off year election votes.

Exit question: If Donald Trump is reelected in 2020, will Kathleen Parker predict that Democrats voted into office in 2022 will remove him?