The Economist magazine, based in the United Kingdom, must have been jealous of the deranged cover of Der Spiegel featuring Donald Trump holding a bloody machete in one hand and the head of the Statue of Liberty in the other hand. In order to attempt to surpass them in the field of Trump derangement they have featured Trump throwing a Molotov cocktail on their cover. In fact The Economist editors are so proud of their TDS artwork that they have even featured it at the top of their twitter feed.

Their lead story, An insurgent in the White House, matches the derangement of the cover:

WASHINGTON is in the grip of a revolution. The bleak cadence of last month’s inauguration was still in the air when Donald Trump lobbed the first Molotov cocktail of policies and executive orders against the capital’s brilliant-white porticos. He has not stopped. Quitting the Trans-Pacific Partnership, demanding a renegotiation of NAFTA and a wall with Mexico, overhauling immigration, warming to Brexit-bound Britain and Russia, cooling to the European Union, defending torture, attacking the press: onward he and his people charged, leaving the wreckage of received opinion smouldering in their wake. 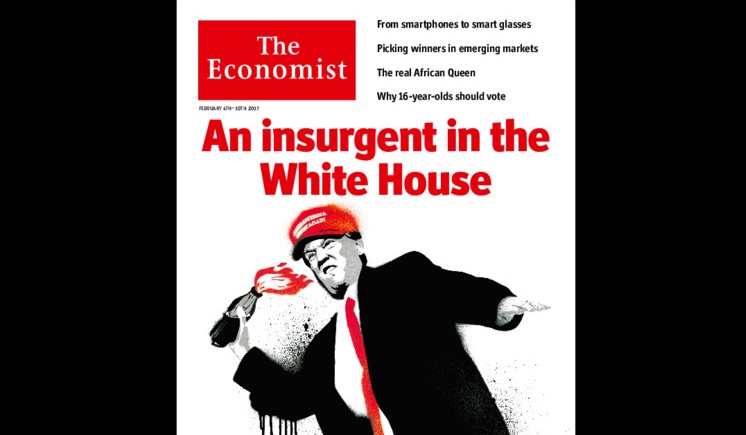 The Economist also extended their bomb throwing imagery to include his aides:

His grenade-chuckers-in-chief, Stephen Bannon and Stephen Miller, have now carried that logic into government ...

This exhibition of Trump derangement did not go over well with many of their readers:

I am a long time reader of The Economist, mostly because of its past even keeled assessment of the issues. However, I have found, in recent years, the articles penned by your writers filled with much hyperbole and prejudiced opinion. The Economist was once one of the few media institutions I trusted to give me a true objective assessment of the issues of the day. Please return to your former ways; hyperbole and opinion diminish your product in every way making you indistinguishable from the droll media you once rose above.

As for TE's constant alarmist rhetoric, once Trump supporters begin looting, pillaging, burning, and suppressing political opinion--the type of behavior that is becoming increasingly prevalent in our large cities--then I will start worrying. Until then, TE's collection of Trump hit pieces are just another log to throw on the fire of my indifference.

Picture shows Trump throwing Molotov cocktail. But reality is that the only ones throwing cocktails are the left. See what happened in Berkeley this week. The left has gone insane. The Democrats are in process of Corbynizing their party, just as in UK.

You have got to be kidding me with that cover.
It´s anti-Trump people who are rioting and looting and throwing Molotov cocktails!!!
It´s anti-Trump fascistic thugs who are attacking pro-Trump events!!!
And yet you have the cheek to show Trump as the Molotov thrower?!?

Ironically, despite their unhinged attack upon Trump, The Economist inadvertently admitted he was right about other nations not paying their fair share to NATO:

...America’s allies must strive to preserve multilateral institutions for the day after Mr Trump, by bolstering their finances and limiting the strife within them. And they must plan for a world without American leadership. If anyone is tempted to look to China to take on the mantle, it is not ready, even if that were desirable. Europe will no longer have the luxury of underfunding NATO and undercutting the EU’s foreign service—the closest it has to a State Department.

Thank you for admitting that. That is the big thing people should take away from this attack piece. The Economist admits Trump was right about NATO. Pass that along to your friends.