It must be nice getting debate questions in advance. Such is one of the many Wikileaks revelations contained in John Podesta's emails. As you can see dramatically illustrated in the video below, current Democratic National Committee Chair Donna Brazile is boasting in an email that "From time to time I get the questions in advance." The question by News One Now host Roland Martin to Hillary Clinton during the March 13 debate in Columbus, OH between her and Bernie Sanders reveals just how accurate the advance question obtained by Brazile was.

Right now Donna Brazile is denying that she fed Hillary that debate question despite the fact that Roland Martin's question exactly mirrored the death penalty stats cited in her email:

Democratic National Committee Chair Donna Brazile denied tipping off Hillary Clinton's campaign after an email published by WikiLeaks Tuesday purported to show her passing along a question in advance of a March 13 town hall hosted by CNN.

Brazile was at the time a contributor to CNN but stepped away from the cable network to become the interim chairwoman of the DNC after Rep. Debbie Wasserman Schultz, D-Fla., stepped down from the chairmanship in July after the first emails stolen from DNC servers were leaked on the eve of the party's convention.

"From time to time I get the questions in advance," Brazile, formerly an adviser to President Bill Clinton, allegedly wrote in the email subject line, dated March 12, a day before the town hall. The email was contained in a trove of emails leaked from Clinton campaign chairman John Podesta's inbox.

"Here's one that worries me about HRC," the email, addressed to Clinton communications director Jennifer Palmieri, reads. 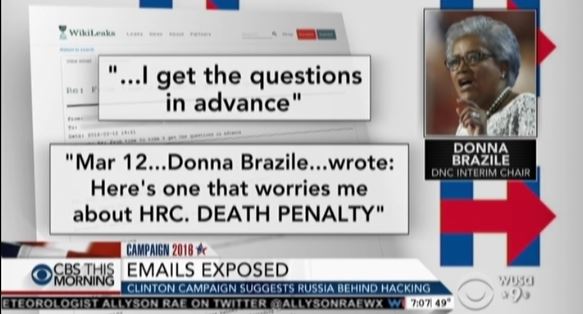 And here is the absurd U.S. News & World Report disclaimer:

Ultimately, the question posed about the death penalty at the town hall was different than the one in the email.

Yeah, instead of "U.S." as in the email, Roland Martin used the term "this country." So very "different" even though the stats and almost everything else matched up. Oh, and then there was that boast in the email subject line: "From time to time I get the questions in advance."