Does shutting down any sign of political diversity demonstrate leadership? Apparently Fortune magazine believes it does because they awarded Black Lives Matters slot #27 in its pantheon of the world's 50 greatest leaders. The award was shared by BLM founders Alicia Garza, Patrisse Cullors, and Opal Tometi. You can see a photo below of the totalitarian trio giving the clenched fist communist salute. Fortune explains why an organization devoted to preventing contrary thought is so deserving of its award: 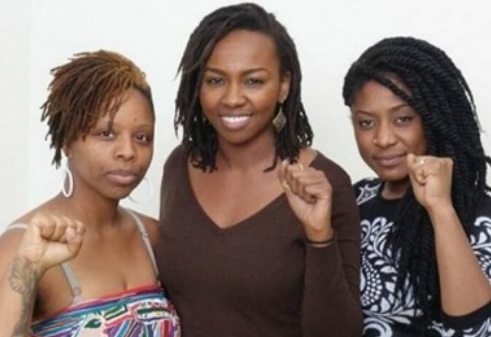 Modern social movements often fizzle after their moment in the national news (Occupy Wall Street and to a lesser extent the Tea Party come to mind). But Black Lives Matter has steadily gained momentum since its founding in 2013, when activist Alicia Garza coined the phrase and fellow activist Patrisse Cullors made it a hashtag. Alongside Opal Tometi, they created the Black Lives Matter network, which has grown to 28 local chapters, each fighting a range of racial injustices like police brutality and racial profiling. Last year the movement inspired college students to take up the mantel, with some successes (the system president and chancellor of the University of Missouri resigned over outcry they failed to address campus racism). They also pushed the presidential candidates to address the country’s systemic racism – an issue would-be nominees would probably have preferred to sidestep.

Actually, in the case of former presidential candidate Martin O'Malley, they shouted him down for daring to utter the taboo thought crime phrase "All Lives Matter." In the case of Bernie Sanders, BLM both shouted him down and forced him off the stage as you can see in the following video.