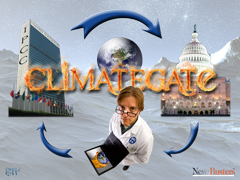 Your humble correspondent has been checking the Huffington Post Green section every day since the ClimateGate scandal exploded. After all, that Green section is pretty much predicated on the theory that the earth is warming dangerously and that Man is the cause of it. At first, the Green section had a few relatively minor stories attempting to dispute the revelations of the ClimateGate scandal. However, today the Huffington Post went into a complete panic mode on this topic. Bigtime.

The Green section now features a huge story at the top of the page by Katherine Goldstein which features a slideshow supposedly exposing "The 7 Biggest Lies About the Supposed 'Global Warming Hoax'." However, even many of their own readers aren't buying the lame excuses presented as you will see here.

So let us now join the Huffington Post Green section as irritation is expressed over the term "ClimateGate" as they wish it to be replaced by "SwiftHack":

A few weeks ago, hackers broke into the emails of one of the Climate Research Unit of The University of East Anglia, and climate skeptics have been having a field day making mountains out of molehills about what the emails contain. The verdict on global warming is in -- it's caused by humans and it is happening and nothing in the emails remotely challenges that. However, with the internet abuzz about what has been labeled "ClimateGate," we thought we should set the record straight about the rumors, lies and insinuations about what the emails actually contain -- and what they "prove" about climate change. "ClimateGate" itself is a misnomer, the nickname should be "SwiftHack" for the way people with political agendas have "swiftboated" the global warming reality.

Translation: My mind is made up so don't confuse me with the facts.

Check out our slideshow and pick what you think the most dangerous lie that is being spread by skeptics about the emails.

Oh goody! A multi-media slideshow! Let us now look at each of the seven "refutations" about the ClimateGate revelations and how many of the Huffington Post's own readers aren't buying the lame excuses presented:

Skeptics have been pointing to an email from scientist Phil Jones where he said he used a "trick" with his data. As climate expert Bob Ward writes, "Scientists say 'trick' not just to mean deception. They mean it as a clever way of doing something -- a short cut can be a trick." RealClimate also explained that "the 'trick' is just to plot the instrumental records along with reconstruction so that the context of the recent warming is clear. Scientists often use the term 'trick' to refer to ... 'a good way to deal with a problem', rather than something that is 'secret', and so there is nothing problematic in this at all."

"Hide the decline." And now for the HuffPo reader reaction:

I'm sorry but if I were sitting on a jury and the Prosecutor told us 'since we have the police report and our investigation report we destroyed the evidence because it was no longer needed, I'd look out the window to see what color the sky was!

It's all unraveling and the left still tries to defend this scam of the century. Sorry folks, using terms like "swiftboating" won't work this time.

Katherine, you and your fellow travelers on are the wrong side of history...­again. The email exposure came from a whistle blower. Lot of money to be made on this false science and you know it. Not to mention futhering the goals of your NWO buds. Sunlight is a trmendous disinfectant. I think I'll just enjoy the warmth for a while.

Fact: The University of East Anglia has admitted that they destroyed their raw data, and all that is available for their peers to fact check is the manipulated data they used to construct their report.

Fact: The programmers working on both the raw and manipulated data noted that the raw data itself was rubbish. In fact, programmers notes indicate that they could just make it up.

Fact: Several professional "scientists" did allegedly conspire to keep reports out of the peer review process and prevent them from being published, according to the emails - and to their peers.

Aiiieeee!!! Stop with the inconvenient facts! And now to the next "lie" of the slideshow:

CLAIM: Scientists had private doubts about whether the world really is heating up.

RUTH: Combing through over a decade of personal correspondence, which is then taken out of context can seem to prove just about anything. Skeptics have been pointing to one email from Kevin Trenberth, in which he said, "The fact is that we can't account for the lack of warming at the moment and it is a travesty that we can't." However, this is clear example of cherrypicking quotes. Trenberth was referring to that there was an "incomplete explanation" of the short-term variability of temperatures, but concludes that "global warming is unequivocally happening."

Ah! The overused "taken out of context" excuse. But will your HuffPo readers buy it? Let us see:

I am a working scientist, have maintained a well-funded lab group for 25 years, and have published over 100 papers in my career, and I have never heard a scientist (at least not in the life sciences) use the word "trick" when describing data analysis.

CLAIM: These scientists worked to suppress evidence and deleted emails.

TRUTH: Thousands of emails from over 13 years were stolen, and edited, and have been taken out of context for those with a political agenda.

...As climate czar Carol Brower says, "I'm sticking with the 2,500 scientists [of the Intergovernmental Panel on Climate Change.] These people have been studying this issue for a very long time and agree this problem is real."

She's sticking with her approved scientists and closed her mind to the many other scientists who disagree. And now to hear from the HuffPo readers again:

I love the Carol Browner quote of 2500 scientist, may she could discuss it with the 31,000 who are non-beleivers.

All this shows that a thorough investigation needs to be conducted and before anything is decided in Copenhagen. I think a panel of honest ,openminded and trustworthy scientists from either side of this debate could be found to do this. It is only fair considering the effect the Copenhagen treaty is going to have on our economy and taxes.

No! No! Carol Browner says "case closed" because she found 2500 scientists agree with her and never mind the rest. Next "lie" from the roundup:

CLAIM: Scientists have been working to remove skeptical peers from the climate discussion.

TRUTH: Organization politics, disagreement and strife are hardly foreign ideas in university, research and scientific communities. As the blog run by climate scientists Real Climate writes, "Since emails are normally intended to be private, people writing them are, shall we say, somewhat freer in expressing themselves than they would in a public statement." Again, this does not remotely prove any sort of cover-up, and the critiques of these papers were made and debated by scientists PUBLICLY, but perhaps less bluntly than they were stated in the emails.

Oh no peer suppression. Absolutely none at all. What's with Goldstein? She thinks she can get away with posting an absolutely false "truth?" And the one who can contradict this "truth" is none other than Phil Jones, formerly of the University of East Anglia who in an e-mail to Michael Mann stated:

The other paper by MM is just garbage - as you knew. De Freitas again. Pielke is also losing all credibility as well by replying to the mad Finn as well - frequently as I see it.I can't see either of these papers being in the next IPCC report. Kevin and I will keep
them out somehow - even if we have to redefine what the peer-review literature is!

And now for the fifth "lie":

CLAIM: These emails are the final nail in the coffin for the idea that humans cause global warming.

TRUTH: If the denier's wildest claims were true that are bantered around throughout the Internet, wouldn't nearly 15 years of emails ACTUALLY SHOW some of these insipid rumors to be true?

I just presented an email above ACTUALLY SHOWING the "rumor" about peer suppression to be true. There are many other such emails showing data manipulation ("hide the decline" and  suppression of contrary views. Problem is you just don't seem to either read them or recognize they exist. They do.

CLAIM: This reignites the debate about if global warming is real.

TRUTH: There is strong consensus in scientific community that global warming is real and is caused by humans. The top scientists in the world have just released a new report on the realities of global warming. Kevin Grandia summarizes some of the key points about emissions, melting ice sheets, and rising sea levels. The emails don't change any of this reality.

What about the top scientists in the world who do NOT agree with this consensus? If global warming is real, why have temperatures been declining since 1998?

And now to the final lie, this one presented by your humble correspondent:

CLAIM: You stated in your story headline that there were 7 lies that were to be exposed.

So it seems the "refutations" in this Huffington Post Green section ClimateGate panic story just don't add up. They can't even count up to 7.

DO WE HAVE A FREE SOCIETY ARE DON'T WE? APPROVE THE PENDING MESSAGES!