Now that Sen. Marco Rubio (R-Fla.) has stepped onto the national stage by delivering the Republican response to President Obama’s State of the Union address, the media’s effort to undermine him is underway. On CNN’s Tuesday night post-address coverage, senior political analyst Gloria Borger sought to misrepresent Rubio’s view on the role of government.

Here is Borger’s take on the Florida senator:


"I mean, Marco Rubio says the truth is every problem can't be solved by government. I think at a certain point, you have to kind of move away from that argument as [Gov. Jennifer Granholm] was saying, and you have to talk about, OK, government has to do certain things."

Rubio did indeed say those words. But here is the context:

"And the truth is, every problem can't be solved by the government. Many are caused by the moral breakdown in our society. And the answer to these challenges lie primarily in our families and our faiths, not our politicians."

Borger wants Rubio to admit that “government has to do certain things.” But Rubio acknowledged as much earlier in his address: 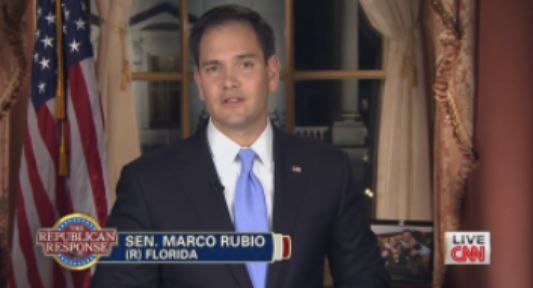 Now, does this mean that there's no role for government? Of course not. It plays a crucial part in keeping us safe, enforcing rules, and providing some security against the risks of modern life. But government's role is wisely limited by the Constitution, and it can't play its essential role when it ignores those limits.

That is the voice of a man who understands that government has a necessary part to play, albeit a limited one, in American life. However, in today’s media playbook, every Republican must be painted as a far-right zealot who is diametrically opposed to government. Especially if that Republican may one day run for president and threaten the liberal establishment with a strong appeal to voting demographics which traditionally fall in the Democratic column.