As the nation moves closer to the sequester, set to take effect on March 1, NBC is digging in its heels in opposition. On Saturday’s Today, the network ran a story that leaned heavily against the looming automatic spending cuts (surprise, surprise). NBC aimed right for the heart strings by featuring a Colorado high school counselor who had the following “message for Congress”: “At the time when we are looking at ways to keep our schools safer, these across-the-board cuts would impact those positions and those people who keep our schools safe.”

Very clever. It appears NBC is using the gun issue to try and persuade conservatives to give up on the sequester, which would cut spending by $85 billion and greatly help reduce the federal deficit. But NBC, like the president, is uninterested in deficit reduction through spending cuts.

The story, narrated by White House correspondent Kristen Welker, went on to include two sound bites from President Obama and one from outgoing Defense Secretary Leon Panetta. Both men voiced their opposition to the sequester. Welker did include one sound bite from Speaker John Boehner, presumably in order to give the appearance of balance.

Welker closed the story by attempting to crystallize viewers’ emotional opposition to the cuts: "Meanwhile, for millions of Americans, the deadline isn't about party politics. It's about preserving what's important.” She then turned to the same high school counselor quoted earlier, who had another message for Congress: “Come together to find a solution so that we don't have cuts that will harm our students."

What kind of monster would cut funding for students, right?

It should be noted --although Welker failed to do so -- that the sequester was initially conceived as President Obama’s weapon in the debt reduction fight. It was meant to threaten Republicans with cuts that disproportionately affected national defense. Now, it appears Obama is opposed to all cuts, including defense cuts. The sequester has come back to bite him, but the liberal media narrative is that the Republicans are to blame for the president's short-sighted gimmick. 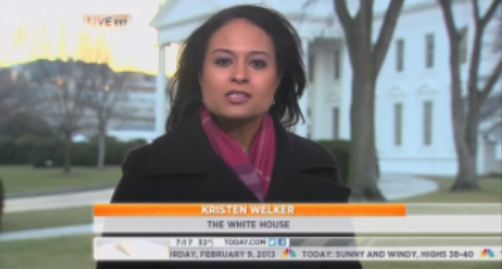 ERICA HILL: President Obama is gearing up for another fight with congressional lawmakers, this one over the impending sweeping spending cuts that could have a major effect on you. Kristen Welker's at the White House this morning. Kristen, good morning.

KRISTEN WELKER: Erica, good morning to you. Senior administration officials say President Obama will spend the weekend working on his State of the Union address. It's a speech that will focus largely on the economy and the middle class. This as Washington gets closer to yet another potential economic crisis.

(Voiceover): Amy Baca Ohlert [?] is a high school counselor from North Glen, Colorado. She's traveled all the way to Washington with other educators with a message for Congress.

WELKER: She's talking about the so-called sequester. $85 billion in spending cuts set to kick in March 1, meant to be so egregious that lawmakers would have to come to agreement on deficit reduction. But that hasn't happened. And time is running out.

BARACK OBAMA: If the sequester is allowed to go forward, thousands of Americans who work in fields like national security, education, or clean energy are likely to be laid off.


WELKER: The cuts would also amount to a 13 percent reduction for the military.

LEON PANETTA: This will badly damage our national defense and compromise our ability to respond to crises in a dangerous world.

WELKER: In Washington, it's the same old sticking points with the president insisting the deal include new taxes.

OBAMA: We sure as heck should be willing to ask those of us who are luckiest in the society to close a few loopholes and deductions that the average American doesn't get.

WELKER: While Republicans say it's time to reform entitlements and cut spending.

JOHN BOEHNER: We believe there's a better way to lower the deficit, but Americans do not support sacrificing real spending cuts for more tax hikes.

CHRIS CILIZZA: I think the chances of a deal to avert the sequester are less than 50/50 because you are looking at a very short time frame between now and March 1 to deal with a very complex number and a large set of potential cuts to the federal budget.

WELKER: Meanwhile, for millions of Americans, the deadline isn't about party politics. It's about preserving what's important.

BACA OHLERT: Come together to find a solution so that we don't have cuts that will harm our students.