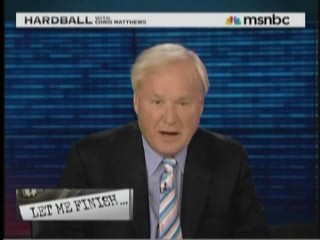 A truly shocking thing happened on Monday's "Hardball": Chris Matthews, the man who once proudly boasted about getting a thrill up his leg when Barack Obama speaks, actually scolded the President on national television.

Maybe even more surprising, the MSNBCer told the object of his affection, "Stop saying that giving people tax cuts is giving people money. It`s their money!"

The unashamed liberal host continued, "A tax cut is when the government doesn`t take our money. It`s an important distinction" (video follows with transcript and commentary):

CHRIS MATTHEWS, HOST: I have one small tweak to make to what the president said today -- he should stop saying that giving people tax cuts is giving people money. It`s their money! A tax cut is when the government doesn`t take our money. It`s an important distinction.

He talked today, for example, about people getting a check from the government in the form of a tax cut. That`s not the way it works. If tax rates are kept lower, it`s a matter of the check going to the government being smaller. Again, it`s an important distinction.

Wouldn't it be nice if others on the Left along with their media minions understood this basic principle?

After all, the way Democrats and press members have been talking about extending the Bush tax cuts lately, it's as if we all work for the government and any money it deigns to give us we should be thankful for.

That an unapologetic liberal like Matthews not only gets this but is also willing to say it on national television makes you wonder why all so-called journalists don't agree.