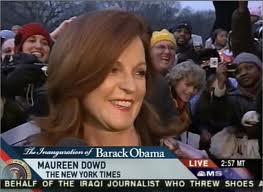 This comes less than 24 hours after CNN.com did exactly the same thing over the same issue.

Needless to say, Dowd's position in her column entitled "Our Mosque Madness" went completely contrary to public opinion regarding the building of an Islamic center at Ground Zero.

But before we get there, let's first take a look at a few paragraphs destined to give many readers whiplash as they slam on their reading brakes in disbelief:

George W. Bush understood this. And it is odd to see Barack Obama less clear about this matter than his predecessor. It's time for W. to weigh in.

This - along with immigration reform and AIDS in Africa - was one of his points of light. As the man who twice went to war in the Muslim world, he has something of an obligation to add his anti-Islamophobia to this mosque madness. W. needs to get his bullhorn back out.

And it is odd to see Barack Obama less clear about this matter than his predecessor. It's time for W. to weigh in.

Actually, what's odd to see is this liberal stalwart bashing an unabashedly liberal President - maybe the most liberal President America has ever seen! - while praising the object of her disaffection in the very same paragraph.

Forgive me - I've got to take a few moments to compose myself.

After all, didn't Dowd just three days prior tear into Obama's left-leaning critics - including MSNBCers with rare unkind words for the current White House resident! - for having the nerve to speak ill of the leader of the growing less and less free world?

Now in roughly 72 hours, this same woman is so disappointed in her hero that she excoriated him with the ultimate dissing: even W understands this issue better than you!

That could leave a scar that will only come out with serious counseling.

Of course, readers shouldn't get giddy over the President being humiliated by a fan, for Dowd had a larger point:

Have any of the screaming critics noticed that there already are two mosques in the same neighborhood - one four blocks away and one 12 blocks away.

Should they be dismantled? And what about the louche liquor stores and strip clubs in the periphery of the sacred ground?

By now you have to be willfully blind not to know that the imam in charge of the project, Feisal Abdul Rauf, is the moderate Muslim we have allegedly been yearning for.

As I'm still recovering from the W is better than O at something remark, let me bring in Commentary's Jennifer Rubin to assist in tearing apart this inanity:

Uh, not really. We're yearning for a Muslim who specifically condemns Hamas as a terrorist group and doesn't suggest that the U.S. is responsible for 9/11. We're yearning for a Muslim who doesn't use "hallowed ground" - where 3,000 Americans died at the hands of Islamist extremists - to build a "a symbol of victory for militant Muslims around the world." (That from an American Muslim whose mother was incinerated on 9/11 by those who "believed that all non-Muslims are infidels and that the duty of Muslims is to renounce them.") We're yearning for a Muslim who is "desperate to reform his faith" and forthright in his assessment that the placement of the mosque at Ground Zero is based on "a belief that Islamic structures are a political statement and even Ground Zero should be looked upon through the lens of political Islam and not a solely American one." (That from a Muslim and former U.S. Navy officer.)

So much for Maureen's moderate Muslim moniker.

But let's allow that to pass for a moment, as what seems more interesting than her typically errant banter about this so-called religion of peace was that Dowd wasn't the only liberal columnist to suggest in the past few days that Obama needs help on this issue from Bush.

As Byron York wrote Wednesday at the Washington Examiner, this appears to be a strain being caught by others:

Washington Post columnist Eugene Robinson is also looking for an assist from Bush. "I...would love to hear from former President Bush on this issue," Robinson wrote Tuesday in a Post chat session. [...]

And Peter Beinart, a former editor of the New Republic, is also feeling some nostalgia for the former president. "Words I never thought I'd write: I pine for George W. Bush," Beinart wrote Tuesday in The Daily Beast. "Whatever his flaws, the man respected religion, all religion." [...]

For the moment, with Obama failing to live up to expectations, Bush-bashing is over. It's all a little amusing -- and perhaps a little maddening -- for some members of the Bush circle. When I asked Karl Rove to comment, he responded that it means "redemption is always available for liberals and time causes even the most stubborn of ideologues to revisit mistaken judgments." But won't these Bush critics shortly return to criticizing Bush? "This Bush swoon by selected members of the left commentariat is temporary," Rove answered. "Their swamp fevers will return momentarily."

Well, if it doesn't, liberals can rest assured the Obama administration is working on a vaccine it hopes will be far more effective at preventing this malady than the one it forced upon Americans to fend off the dreaded swine flu.
Ground Zero mosque New York Times Peter Beinart Byron York Eugene Robinson