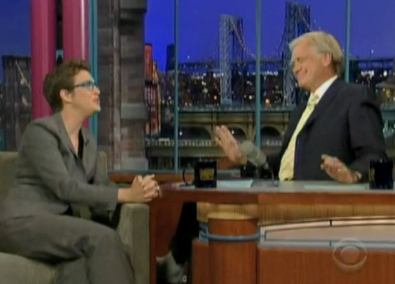 After the host of CBS's "Late Show" asked his perilously biased guest about the Andrew Breitbart-Shirley Sherrod affair, the MSNBCer predictably pointed her accusatory finger at Fox News and everybody on the right.

"Somebody coming to take what is white people's rightful property," she continued. "And you get them riled up so they feel like they need to vote in self-defense, and they vote for conservative candidates because of that fear" (video follows with partial transcript and commentary, h/t TVNewser):

DAVID LETTERMAN: Oh, that's right. This guy has done it before.

LETTERMAN: So, in, in, in the collective ideology of Fox and others, to what end? What is the objective of this sort of nonsense?

MADDOW: Scaring white people is good politics on the conservative side of the spectrum, and it always has been. The idea is you sort of rile up the white base to be afraid of an other, to be afraid of the scary immigrants or scary black people. Somebody coming to take what is white people's rightful property. Or rights. And you get them riled up so they feel like they need to vote in self-defense, and they vote for conservative candidates because of that fear. I mean we've been doing it for decades.

MADDOW: I think that, I mean, I think you're totally right. It should get better. And the way it's going to get better is not by slime balls being less slimy. There's always going to be Breitbarts and Fox Newses. That's going to happen. What's different now is actually CNN, CNN spent the whole day the day that day broke debunking it. They got Shirley Sherrod on the air. They talked about what she was really saying. They showed how it was edited together wrongly. MSNBC did the same thing. But it was one of these things where actually I think Breitbart and Fox came off worse for having done that. And so maybe that's the best, that's the best antidote is just by sheer mockery of the people who do it.

LETTERMAN: And then in response, Bill O'Reilly, who has been on this show many times and I have a theory about Bill O'Reilly, smart guy. And I think he knows better than what he's doing, but he's just found a place to, you know, make a living. And if, if you needed a, he'd be a weatherman if the money was right or he'd do sports if the money was right. He's just doing this because that's where the money is. I don't think you can be as smart as he is and actually believe what he believes.

Isn't it wonderful that America has people like Maddow and Letterman around to propagandize the public?

What would we do without them?