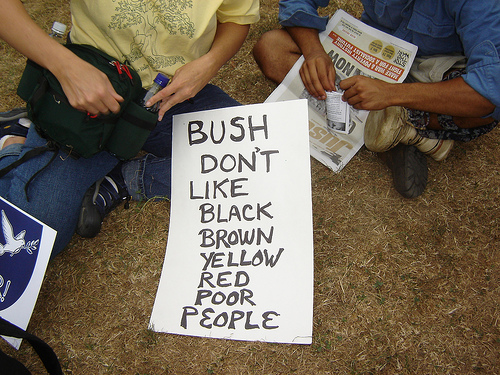 I hate the way they portray us in the media. If you see a black family, it says they're looting. See a white family, it says they're looking for food. And you know that it's been five days because most of the people are black. And even for me to complain about it, I would be a hypocrite because I've tried to turn away from the TV, because it's too hard to watch. I've even been shopping before I've even given a donation. So now I'm calling my business manager right now to see what is the biggest amount I can give, and just to imagine if I was down there, and those are my people down there. So anybody out there that wants to do anything that we can help with the set up the way America is set up to help the poor, the black people, the less well-off as slow as possible. I mean, the Red Cross is doing everything they can. We already realize a lot of people that could help are at war right now, fighting another way, and they have given them permission to go down and shoot us...George Bush doesn't care about black people.

Moments after this was uttered on live television, CNN's Larry King asked guest Jesse Jackson about it:

LARRY KING, CNN: Jesse, I understand that Kanye West, a rapper at the NBC telethon tonight, unscripted, said that President Bush, George Bush does not care about black people. Do you have that feeling?

JESSE JACKSON: Well, he responded mighty late and mighty slow. There was one response to the tsunami and some years ago to the -- a response to the Armenian earthquake crisis, but he came in five days late, with platitudes. And in the case of 9/11, he came in two days later and embraced all those who were involved. There's a sense of alienation, a sense of distance, and we don't feel good about it.

I hope that there will be renewed commitment, not to just involve Mr. Bush and Mr. Clinton, but why not involve people like Congressman Bennie Thompson from Mississippi and Cynthia Cleo Fields (ph) and Senator Bigenfiggis (ph). We...

JACKSON: ... ought to have a sense of being a part of this, and we're not.

JACKSON: Well, he does not show it. And that's the -- that's the rub. And we need to know, we need to have access for dialogue, and we don't have it.

CNN was all over this story doing numerous segments about it in the coming days, but the supposedly most trusted name in news was certainly not alone in advancing this truly disgraceful theory.

All three broadcast network news divisions reported this possible connection as did most American newspapers such as the New York Times, the Washington Post, USA Today, the Los Angeles Times, the Chicago Tribune, etc. Magazines also did stories about what the disaster said of race relations in this country.

The disgusting notion that Bush's response was due to racism was espoused for years by press members and still is to this very day.

Potentially even worse, this assertion helped make Bush a lame duck less than a year into his final term while assisting the Democrats to take back Congress in 2006 as well as the White House in 2008.

As a result, this ugly contention will likely be a part of our 43rd President's legacy unless sane minds in the future fight to counter it.

Yet, no such connection to the government's pathetic response to the current disaster in the very same region is being made.

Just 32 percent say Mr. Obama has a clear plan to deal with the oil leak, while 59 percent (including 64 percent of Gulf coast residents) say he does not.

The numbers are not much better among those who watched the president's Oval Office speech on the spill last week, with 35 percent of that group saying he has a clear plan and 56 percent saying he does not.

If Bush was still President, would media blame racism for his lack of a plan?

As the answer seems an almost certain "Yes," why is that?

Regardless of the reason, the press would be dead wrong just as they were about Bush's response to Katrina.

Despite their assertions, whatever the White House did or didn't do after that hurricane hit had ABSOLUTELY NOTHING to do with the race of those effected.

That was a disgusting assertion back then that should never have been made or advanced by anyone in our media.

BUT, if they were going to make such a connection then, and would if Bush was still in the White House, that they're not espousing it now despite how absurd it would be makes the way they treated our 43rd President even more reprehensible.

Less so is the lack of curiosity about what is the reason for Obama's pathetic handling of this crisis.

Former New York City major Rudy Giuliani said on MSNBC's "Morning Joe" last week that the response to this oil spill would have been swifter and better coordinated if it happened in the Atlantic Ocean and was impacting the East Coast.

Assuming he's right -- and I believe he is -- why would that be?

Should government's response to a disaster relate to what states are impacted by it?

Such does seem to be the case with the current Administration which seemed quite disinterested in the recent devastating floods in Tennessee. Not surprisingly, the press also largely ignored that disaster.

So what gives here?

Are some people in this country entitled to greater federal assistance in an emergency than others?

Aren't we all Americans, or are some inherently more so?

Finally, if folks in the media believe as I do that this response would have been different if the spill was battering East Coast beaches with oil, where are the questions and the investigations into why that is, or is such curiosity only acceptable when a Republican is in the White House?