Jerry Springer: Liberals That Belittle Sarah Palin 'Come Across as Elitists or Snobs' 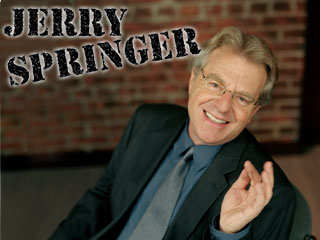 The man that has made a living putting human controversy and personal tragedy in front of the camera says that liberals that belittle Sarah Palin come across as elitists or snobs.

"Well, she's incredibly charismatic. Her politics are different than mine. But I don't belittle her. She represents a significant segment of America."

It might not be the majority, but certainly a significant segment of America that lives her lifestyle and believes as she does. And therefore, I can disagree with her without making fun of her. And for those of us who are more liberal, we step on dangerous ground when we try to belittle her, or belittle her fundamentalism, or religion or stuff like that, saying you know she is backwoods or stuff like that. That is how liberals come across as elitists or snobs. [...]

She's obviously got something going. Just look at the reaction! It wasn't just her 15 minutes of fame. It's lasted. She touches a nerve for people who resent being looked down upon. And there is a significant segment of America that feels it is being looked down upon. I think that's dangerous. It's where people who are liberal can get into trouble. So, I respect her. I disagree with her. But I have nothing bad to say about her. And I am sure anything she does in the media will be successful. She's got that "whatever that is" that makes you pay attention. [...]

I think it would be naive to believe she wasn't thinking about running for president. She'll read the tea leaves and figure it out and figure whether she can win the GOP nomination. Winning the general will be tougher. But you know, who knows? Ten years ago, who would have said that we would have an African American in the White House? World events happen, things come to pass. Is it possible? Sure. Does she think about it? Of course she does. I can't imagine she doesn't.

Must be time for some pigs to fly by my window.