ABC: 'Pelosi Says She Has Much In Common With The Tea Party' 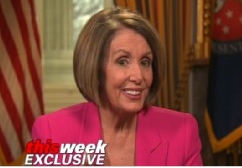 "House Speaker Nancy Pelosi says she has much in common with the Tea Party."

So began an article published by ABCNews.com Sunday about Pelosi's interview with Elizabeth Vargas on "This Week."

"The speaker now says she shares views with movement she dismissed last summer as being 'Astroturf,'" the piece amazingly continued.

And that wasn't CLOSE to being the most preposterous part of the story.

More absurd was how Vargas during this interview actually allowed Pelosi to get away with such a ridiculous comment (video embedded below the fold with transcript and commentary):

ELIZABETH VARGAS, ABC NEWS: Let's talk a bit about the coming elections in November. You had recently-- and the Tea Party movement, do you think it will be a force to be reckoned with? You had said last summer that it was a faux grassroots movement. You called it the Astroturf movement.

NANCY PELOSI, HOUSE SPEAKER: In some respects it is. Uh-huh.

VARGAS: Is the Tea Party movement a force?

VARGAS: So, common ground with many people in the Tea Party movement.

PELOSI: Well, no, there are some. There are some because they, again, some of it is orchestrated from the Republican headquarters. Some of it is hijacking the good intentions of lots of people who share some of our concerns that we have about the role of special interests and many Tea Partiers, not that I speak for them, share the view, whether it's -- and Democrats, Republicans and Independents share the view that the recent Supreme Court decision, which greatly empowers the special interests, is something that they oppose.

And that was that.

Maybe Vargas could have mentioned to the Speaker how she is the target of great ridicule at Tea Party gatherings.

Or how about asking the Speaker how she could possibly share anything in common with a group she pathetically claimed last August was carrying swastikas?

No, Vargas didn't bring any of that up.

Instead, she gave the Speaker a pass on an absurd statement, and then the folks at ABCNews.com synthesized it into an equally absurd piece at their blog "The Note" with the equally absurd headline, "Pelosi and the Tea Party 'Share Views.'"

Boggles the mind, doesn't it?

Of course, on the flipside this demonstrates how powerful the Tea Party movement has become, and how wrong media outlets like ABC were to ignore it a year ago.

After all, if they're now going to great lengths to demonstrate what their beloved Speaker has in common with the movement, it must be a far greater force than they've been reporting for over a year.

*****Update: Vargas might also have asked Pelosi about what she referred to as angry rhetoric last September (h/t NBer BKeyser)...

I think we all have to take responsibility for our actions and our words. We are a free country, and this balance between freedom and safety is one that we carefully balance. I have concerns about some of the language that is being used because I saw -- I saw this myself in the late `70s in San Francisco. This kind of rhetoric was very frightening, and it gave -- it created a climate in which we -- violence took place. And so I -- I wish that we would all, again, curb our enthusiasm in some of the statements that are made, understanding that some of the people -- the ears that it is falling on are not as balanced as the person making the statement might assume. But again, our country is great because people can say what they think and they believe. But I also think that they have to take responsibility for any incitement that they may cause.

Less than six months later, the Speaker can talk about what she shares in common with these folks, and a so-called journalist doesn't bother mentioning what she had said about them in the past.

Makes you sick, doesn't it?