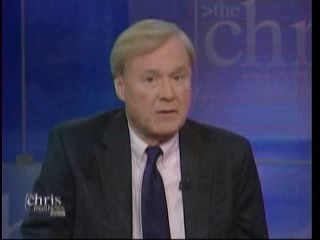 Chris Matthews is beginning to realize that Barack Obama can't change things with just the power of his personality.

Such was amazingly discussed during the syndicated talk show bearing his name this weekend as two White House correspondents made some astonishing claims about the current resident at 1600 Pennsylvania Avenue.

"He feels that he has some ability to bring people together," noted NBC's Savannah Guthrie.

A seemingly stunned Matthews replied, "Well, we're learning that" (video embedded below the fold with transcript):

CHRIS MATTHEWS: You know, if he says what he really believes, Savannah, based upon your reporting over there, would it be popular? That's the key question. Can he be a populist when the country is so anti-government, anti-liberal, anti-spending? The things he wants to do. If he were truly honest, would the public want to hear it?

SAVANNAH GUTHRIE, NBC WHITE HOUSE CORRESPONDENT: Well, I think that he is a practical president. I think that there's a lot of tension and frustration. I hear it all the time. Why doesn't he just get in there and crack skulls? Why can't he be like LBJ and get Congress in line? Come on, you have the Democratic majorities. He is a consensus builder. This is his core identity. He ceded a lot of the healthcare reform bill to Congress, and perhaps that's why some people view it as a left of center product, because he wasn't in there dictating the terms. But, I mean this is the reason he ran for president. It goes back and we all know the story. He feels that he has some ability to bring people together. And they're very frustrated that he hasn't been able to execute that.

MATTHEWS: Okay, this is a key question. Helene, you're at the White House, too. Last question here: How can you be a man of, a leader of the progressive movement, really do things that enlarge the role of government in the healthcare field for example, and in financial regulation, and still make the country in this Kumbaya, we all get along mood? If you change, it bothers people.

HELENE COOPER, NEW YORK TIMES WHITE HOUSE CORRESPONDENT: I think that, that is so much at the center of why Obama, President Obama is having so many problems right now. There's he, there's this fundamental belief that he can change, that the power of his personality and the power of his oratory can change people and that just doesn't happen. There's this over-reliance I think at the White House that if the President gives a very big speech, or if he comes out there, that his, that he can persuade people and he can do it. And at the same time you don't have anything changing at the bottom of the way Washington works.

MATTHEWS: He promised change, and yet what he said what the change was...

COOPER: But you can't just do it with the power of your personality.

Actually, what's really sad is that Matthews and Company didn't know this BEFORE they campaigned for him.

After all, despite the tingles up the leg and the sycophant gushing by so-called journalists practically from the moment Obama announced his candidacy in February 2007, that any of these folks actually BELIEVED the hype they were espousing is almost unimaginable.

Yet, in the course of a two-minute segment, two White House correspondents and one MSNBC host actually expressed on a nationally-syndicated show some surprise that the President is just a mortal who can't persuade all he meets - including elected officials with far more years and experience in Washington! - with just his personality.

Exit question: which is more astonishing - that these people sold this nonsense to the public during the campaign, or that they believed it?