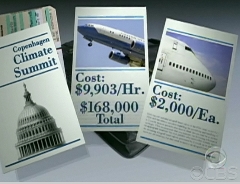 It must really be cold outside, for the CBS "Evening News" Monday actually did a segment exposing how members of Congress wasted a huge amount of money at the United Nations' climate summit in Copenhagen last month.

Readers are encouraged to strap themselves in tightly, for this report coming from the global warming-obsessed media seems as likely as freezing temperatures in Miami (video embedded below the fold with partial transcript):

SHARYL ATTKISSON: Few would argue with the U.S. having a presence at the Copenhagen Climate Summit. But wait until you hear what we found about how many in Congress got all-expense paid trips to Denmark on your dime.

Our cameras spotted House Speaker Nancy Pelosi at the summit. She called the shots on who got to go. That's House Majority Leader Steny Hoyer, and there's the embattled Chairman of the Tax Committee Charles Rangel. [...]

And that's not the half of it. But finding out more was a bit like trying to get the keys to Ft. Knox. Many referred us to Speaker Pelosi who wouldn't agree to an interview. Her office told us, "It will comply with disclosure requirements" but wouldn't give us cost estimates or even tell us where they all stayed.

Senator Inhofe is one of the few who provided us any detail. He attended the summit on his own for just a few hours, to give an "opposing view."

SENATOR JIM INHOFE, (R-OKLAHOMA): They're going because it's the biggest party of the year. The worst thing that happened there is they ran out of caviar."

ATTKISSON : Our investigation found that the congressional delegation was so large, it needed three military jets: two 737's and a Gulfstream Five -- up to 64 passengers -- traveling in luxurious comfort.

Along with those who flew commercial, we counted at least 101 Congress-related attendees. All for a summit that failed to deliver a global climate deal.

As a perk, some took spouses, since they could snag an open seat on a military jet or share a room at no extra cost to taxpayers. That's Congresswoman Giffords holding her husband's had. Moore Capito and her husband. Markey took his wife wearing red, as did Sensenbrenner. Congressman Barton -- a climate change skeptic -- even brought along his daughter.

Until required filings are made in the coming weeks, we can only figure bits and pieces of the cost to you.

-Dozens flew commercial at up to $2,000 each. More than 300 hotel nights booked - the bulk at Copenhagen's five-star Marriott.

Watchdog Steve Ellis wasn't against a U.S. presence. But he considering the deficit...

STEVE ELLIS, TAXPAYERS FOR COMMON SENSE: Every penny counts. Congress should be shaking the couch cushions looking for change, rather than spending cash for everybody to go to Copenhagen.

ATKISSON: Nobody we asked would defend the super-sized Congressional presence on camera. One Democrat said it showed the world the U.S. is serious about climate change.

And all those attendees who went to the summit rather than hooking up by teleconference? They produced enough climate-stunting carbon dioxide to fill 10,000 Olympic swimming pools.

Which means even if Congress didn't get a global agreement, they left an indelible footprint all the same.

Wow! Somebody pinch me.