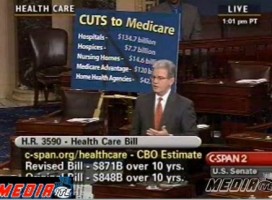 Sen. Tom Coburn (R-Okla.) told people on Sunday they should pray someone misses Monday morning's crucial healthcare vote, and media members predictably gasped as if he was hoping a Senator would take ill or worse.

Somehow all those hyperventilating missed that there was a major snowstorm over the weekend closing airports and snarling traffic, and that travel impediments might have acted to prevent those not already in the nation's capital from getting there.

Likely with this in mind, Coburn said Sunday, "What the American people ought to pray is that somebody can't make the vote tonight. That's what they ought to pray."

The Washington Post's Dana Milbank gruesomely took issue with this in his piece "An Ugly Finale For Health-care Reform" (video of Coburn's remarks embedded below the fold):

Going into Monday morning's crucial Senate vote on health-care legislation, Republican chances for defeating the bill had come down to a last, macabre hope. They needed one Democratic senator to die -- or at least become incapacitated.

Imagine that. As far as Milbank was concerned, Republicans were actually hoping somebody would die:

At 4 p.m. Sunday afternoon -- nine hours before the 1 a.m. vote that would effectively clinch the legislation's passage -- Sen. Tom Coburn (R-Okla.) went to the Senate floor to propose a prayer. "What the American people ought to pray is that somebody can't make the vote tonight," he said. "That's what they ought to pray."

It was difficult to escape the conclusion that Coburn was referring to the 92-year-old, wheelchair-bound Sen. Robert Byrd (D-W.V.) who has been in and out of hospitals and lay at home ailing. It would not be easy for Byrd to get out of bed in the wee hours with deep snow on the ground and ice on the roads -- but without his vote, Democrats wouldn't have the 60 they needed.

Difficult to escape that conclusion? When the area had just been hit with an historic snowstorm?

Senator Tom Coburn, Republican of Oklahoma and a leading opponent of the measure, said Sunday that a missing Democrat might be the best hope for foes of the overhaul.

"What the American people should pray is that somebody can't make the vote," he said in a floor remark that Democrats found offensive and suggestive of wishing misfortune on one of them.

The liberal Huffington Post was even more obvious in its "Robert Byrd's Death Seemingly Wished For By Tom Coburn":

On Sunday afternoon, Sen. Tom Coburn (R-Okla.) appeared to propose a prayer for Robert Byrd's death so that health care reform would not pass.

Will other media follow suit and speculate on the same macabre intent?

Republican Sen. Tom Coburn did not wish "misfortune" on anyone when he asked people to pray that lawmakers miss a key vote on health care reform, a spokesman said Monday, rejecting suggestions from Democrats that the Oklahoma doctor was wishing ill on his colleagues.

Rather, Coburn was hoping -- praying, even -- that sleep-deprived Democrats would hit the snooze button one too many times and miss the vote scheduled for 1 a.m. ET Monday morning.

"If senators are napping before the vote he would not be disappointed if alarm clocks don't go off," spokesman John Hart said in an e-mail.